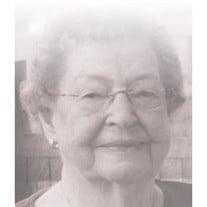 Agnes Virginia Wilkins, 95, of Toledo, passed away Saturday, August 15, 2015 at Northwest Ohio Hospice Center surrounded by her loving family. Born April 11, 1920 in Ravenswood, W.VA, to John and Lucinda (Faren) Wetzel, she grew up during the depression with the only thing in abundance being love. She met our father, Morgan Porter Wilkins and they married in 1942 celebrating 73 years of marriage on July 25th of this year. To say that her family was her life is an understatement. She was a loving wife to Morgan and mother to six children, grandmother of 17, and great-grandmother to 22 with another on the way. Unconditional loving and giving was her MO, going to sporting events, dance lessons, music lessons, making an infinite amount of meals, and the list goes on. And perhaps we never said thank-you enough, but she knew. She knew because we flocked home whenever we could to be together - grandchildren, great-grandchildren- the more the merrier. So many memories made sweeter because she was there. She was a matriarch with a wonderful sense of humor and a love of life. A devoted Detroit Tigers fan and golf enthusiast, she even shot a hole in one at the age of 80. She was a volunteer at Flower Hospital for over 25 years and a member of Aldersgate United Methodist Church for over 60 years. She also belonged to several bridge groups with some of her dearest friends, one of which she was a member of for more than 40 years. Her faith was strong which reassures us that she is now with her parents, John and Lucinda Wetzel; sister Mildred; brothers, Earl, Darryl, Paul, and Carl; son-in-law James Garvin; former daughter-in-law Lora (McGee) Wilkins Keane, and great-granddaughter Presley Marie Wilkins. She is survived by her loving and devoted husband Morgan Porter Wilkins Sr., son Porter (Wendy) Wilkins; son Robert (Patricia) Wilkins; daughter Sandy Garvin; daughter Rhonda (Dave) Lahmers; son Terry (Beth) Wilkins, daughter Judy (Mark) Sobanski along with many grandchildren and great-grandchildren. Forever in our hearts, we know she will be waiting for us to all be together again and what a time we will have! Visitation will be from 4-8 p.m. on Monday, August 17, 2015 at the Ansberg-West Funeral Home, 3000 W. Sylvania Ave., Toledo, OH. Funeral services will begin at 10 a.m. Tuesday, August 18, 2015 at Aldersgate United Methodist Church, 4030 Douglas Road, Toledo, OH 43613. In lieu of flowers donations may be made to Aldersgate United Methodist Church. The family wishes to thank the staffs at Swan Creek Memory Enhancement and Rehab Units and Northwest Ohio Hospice for their loving care of Agnes

Agnes Virginia Wilkins, 95, of Toledo, passed away Saturday, August 15, 2015 at Northwest Ohio Hospice Center surrounded by her loving family. Born April 11, 1920 in Ravenswood, W.VA, to John and Lucinda (Faren) Wetzel, she grew up during the... View Obituary & Service Information

The family of Agnes Virginia Wilkins created this Life Tributes page to make it easy to share your memories.