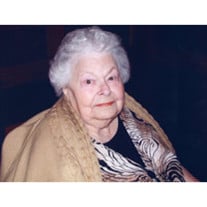 Alda Dale (Douthett) Haddad, age 86, passed away Tuesday, October 6, 2009, in Marion, Ohio after a brief illness. She was born June 28, 1923, in Beaver Falls, Pennsylvania to David Dale and Ethel Douthett. Alda was a 1941 graduate of Scott High School in Toledo, and received her bachelor degree from Bowling Green State University in 1945, and masters degree from The Ohio State University in 1969. A long-time music teacher for the Toledo Public Schools at both the elementary and secondary levels, she ended her career in 1983 teaching alongside her son, Robert, in the music department at Rogers High School. As a member of the First Baptist Church of Greater Toledo for 73 years, she was active in the Hillary Women's Club, past president of the Women's Organization of First Baptist Church, former moderator of the Toledo Association of American Baptist Churches, and sang in the church choi r for over 50 years. She was also a member of the Samma Gamma Club of Presidents, and the Toledo Symphony League, serving as chairperson of the scholarship awards for the League's Remembrance Fund and the Toledo Youth Orchestra. Alda's travels took her across the United States, Europe, and the Middle East, and she was particularly fond of good food, gatherings of family and friends, football Saturdays, and the Ohio State Buckeyes. Alda was preceded in death by her husband, Theodore, whom she married in 1949; her son, Robert; parents David and Ethel Douthett; and brother James Douthett. She is survived by her loving sons Ted (Deborah) Haddad of London, Ohio, and Dale Haddad of Marion, Ohio, and her brother, Walt on Douthett of Albuquerque, New Mexico. Cherishing her memory are her very special grandchildren Cyrus Haddad, Kristen (Eric) Holmes, and Phillip Haddad; the daughters she had always desired- Susan Hanna, Miriam Goldyn, and Kanda Irey; and many cousins, nieces, nephews, and dear friends. She will also be missed by yellow lab, Harley II, her constant companion and source of great laughter. Those who knew Alda loved her; the better they knew her, the more they loved her. Friends may visit the family at Ansberg-West Funeral Home, 3000 West Sylvania Avenue, on Thursday, October 8, 2009, between the hours of 2:00 p.m. and 9:00 p.m. The service, officiated by close friend, Pastor Georganna Mawer, will be at 1:30 p.m. Friday at the funeral home, with interment immediately following at Ottawa Hills Memorial Park. In lieu of flowers, the family requests consideration of donations to the Robert and Alda Haddad Remembrance Fund of the Toledo Symphony League, c/o Joanie Barrett, 8646 Plum Hollow Point, Holland, Ohio 43528.

The family of Alda Dale Haddad created this Life Tributes page to make it easy to share your memories.