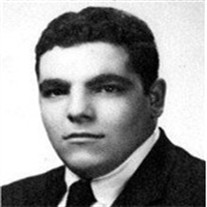 Forever with us. Alex Esse, age 75 years, died peacefully in Hospice at the Heartland in Perrysburg on Friday, April 25, 2014. Alex was born October 1, 1938, in Highland Park, Michigan, the oldest of four to Eddie and Katherine Esse. He attended Fulton Elementary and was a graduate of Scott High School, class of 1956. Alex was an accomplished football player receiving the Cornell award for all city state offense and defense. He was also voted most athletic all four years at Scott, while enjoying singing in the choir. He lived in the Toledo area his whole life and worked an array of various jobs. He started at the Toledo Post Office, owned and operated The Seaport Inn Tavern, co-owned and operated with Moses Patcheo a security guard business named U.S. Investigations. He was also certified in law enforcement in Clay Center, Ohio. He was at Chrysler Jeep in 1984, until placed on permanent disability for his failing health. Alex was a huge animal lover, who knew the gentleness and unconditional love of animals. He spent several years of his life breeding Arabian Stallions, various breeds of dogs, fish, and exotic birds. Alex was known and loved as uncle Al by all, especially those that were his neighbor's children throughout the years. He will be missed by all for his generous nature and kind heart. Survivors include beloved sister, Mary Buyer (Roger); nieces and nephews, Jeanine Lorigan (Dan), Braheim Bejaige, Janan Bejaige (Ayn), Kalil Bejaige (Wendy, Cassidy and Sara), Camille Hall (Rickie, Nicole) and Kathy Harper (Harry). Alex was preceded in death by sister, Alice Jagnaszik; brother, Joseph Esse and parents, Eddie and Katherine Esse. Services will be private, however condolences may be left at www.ansberg-west.com Special thanks to the staff at Heartland of Perrysburg and Hospice for making his final days peaceful. Any contributions can be made to: The Humane Society of Maumee, 1920 Indian Wood Circle, Maumee OH, 43537 or Heartland of Perrysburg, 10540 Fremont Pike, Perrysburg, OH 43551. Arrangements have been entrusted to the Ansberg-West Funeral Directors 419-472-7633 Published in Toledo Blade from May 3 to May 4, 2014

Forever with us. Alex Esse, age 75 years, died peacefully in Hospice at the Heartland in Perrysburg on Friday, April 25, 2014. Alex was born October 1, 1938, in Highland Park, Michigan, the oldest of four to Eddie and Katherine Esse. He attended... View Obituary & Service Information

The family of Alex Esse created this Life Tributes page to make it easy to share your memories.

Forever with us. Alex Esse, age 75 years, died peacefully in...