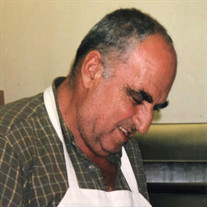 Ali Zein Akl, 72, of Toledo, Ohio passed away peacefully in the comfort of his home, on October 11, 2019. Ali is survived by his wife, Joan, of 36 years, and his seven children, his daughters: Amira and Alia, his sons: Zein (Amber), Amir, Ibrahim (Laila), Habib, and Hydar, his brothers: Mohamad (Ibtesam), Jamal (Abir), Nazem (Rola), Abdul (Nada), Hussein (Rena), his sisters: Abla (Ibrahim), Maward, Mona (Kareem), Najah (Ali), 6 grandchildren, 43 nieces and nephews, and many more extended family members. He was a loving son, brother, husband, father, grandfather, uncle, and friend to many. He is preceded in death by his parents, Hajj Zein Habib Akl, and Hajji Zainab Kassem, his sisters: Fatima and Salha, and his daughter Fatima. (Allah yerhamhoun). Ali was a diligent and hard-working man of many strengths. His courage knew no limit and his stoic determination was evident in all he did. He worked as a meat-cutter in Toledo for over 40 years. And for 32 of those years, he served the people of Toledo through his own meat and grocery store, Ali’s Meat Market, at 3240 W. Sylvania Ave. He was always there to help friends, relatives, and customers-who-became-friends, with stocking up, preparing/cooking meals, or anything else they cared to share with him, usually over coffee. After opening in 1984, his store quickly gained a loyal clientele that included many American, Middle Eastern, and Mediterranean customers who enjoyed the market for many years. He was forced to give up his career due to his health. If you visit the market today, you will notice that his legacy of creating the family-friendly local-butcher-shop experience in Toledo lives on through his children and grandchildren. Ali was buried according to his wishes at the Toledo Memorial Park in Sylvania, Ohio. A one-week memorial service will take place at the Ahlul Bayt Center of Toledo at 6004 Hill Ave. Toledo, Ohio 43615 on Saturday, October 19, 2019 at 1:30 pm. Dinner will follow the program. In lieu of flowers, please consider making a memorial donation to the charity of your choice on his behalf.

Ali Zein Akl, 72, of Toledo, Ohio passed away peacefully in the comfort of his home, on October 11, 2019. Ali is survived by his wife, Joan, of 36 years, and his seven children, his daughters: Amira and Alia, his sons: Zein (Amber), Amir,... View Obituary & Service Information

The family of Ali Zein Akl created this Life Tributes page to make it easy to share your memories.

Ali Zein Akl, 72, of Toledo, Ohio passed away peacefully in the...