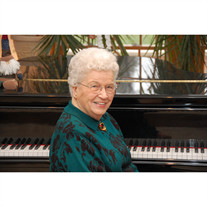 Alice Ella Walbolt Nightingale was born in Waterville, Ohio on November 10, 1923 to Helen (Farnsworth) and Harold Walbolt. And passed away on May 5, 2016 at the Ebeid Hospice in Sylvania. Alice was born and raised in Waterville, Ohio. She attended Waterville School 12 years, walking three-quarters of a mile over the old, dry Miami-Erie Canal (now the Anthony Wayne Trail) to get to the school by the Maumee River. She was a member of Waterville Methodist Episcopal Church. Alice always appreciated the fact she was fortunate to grow up with many cousins, aunts, and uncles of both parents' pioneer families in that small town. Alice attended Bowling Green State University during the war years, 1941-1945, majoring in public school music with an English minor. Alice was a member of Alpha Phi International Fraternity, Phi Sigma Mu, Kappa Delta Pi and Mortar Board Honor Society. Alice taught two years as a Vocal Music teacher in the Maumee Public Elementary and High Schools,. She was married to Homer S. Nightingale in 1947, and taught that year in Toledo Public Schools as a Music Teacher Supervisor. She taught Vocal Music in Washington Local Schools 1966-1983 including 12 years at Meadowvale Elementary school. Alice directed church choirs at Euclid Avenue United Methodist Church 1947-1957, and for Trilby United Methodist Church 1958-1971. During these years, she was a member of Monday Musicale (past president), Delta Kappa Gamma (past president), Child Conservation League, Toledo Choral Society (member and soloist), Friendly Center Guild, United Methodist Women, and Toledo Symphony League. In 2009, she was recognized for 27 years as a Volunteer in the Recreational Therapy Department of Lake Park Hospital leading the weekly Sing-a-Long. Alice was a long time member of Epworth United Methodist Church and served for several years as West Ohio Conference Delegate. Alice moved to Swan Creek Retirement Village in 1999, where she played piano for vespers, Sunday Health Care church and monthly dinner music. She also was a member of the Swan Creek Combo which played “pop” and dance tunes along with “Happy Birthday” to honor residents at meal times. Once a month she played for a sing-a-long at the Lutheran Home. These were the brightest hours in her days when Alice was able to give pleasure, and receive even more of the same, by playing the piano. Alice was preceded in death by her husband of 52 years, Homer S. Nightingale, her parents, her brothers, David Walbolt and Grant Walbolt and her sister Betty Jackson. She is survived by her treasured family: sons, Scott (Linda) Nightingale and Mark (Marsha) Nightingale; daughters, Sara (Ralph) Abell and Jane Kaiser. Grandchildren: Alison Abell, Nathan Abell, Daniel Kaiser, Adam Nightingale, John (Nicole) Nightingale, Philip (Anne) Nightingale, Lisa (James) Leale, and six great grand children. Visitation will be held from 4:00pm to 7:00pm Friday at Ansberg-West Funeral Home, 3000 Sylvania Avenue, Toledo, Ohio 43613. Services will be held 11:00am Saturday at Sylvania First United Methodist church at 7000 Erie Street, Sylvania, Ohio 43560, where friends may gather after 10:00am. Interment will follow in Toledo Memorial Park. Memorials may be made to the Monday Musicale Scholarship Program or The Swan Creek Retirement Village Life Care Fund. Condolences for Alice's family may be expressed online at www.ansberg-west.com

Alice Ella Walbolt Nightingale was born in Waterville, Ohio on November 10, 1923 to Helen (Farnsworth) and Harold Walbolt. And passed away on May 5, 2016 at the Ebeid Hospice in Sylvania. Alice was born and raised in Waterville, Ohio. She attended... View Obituary & Service Information

The family of Alice Nightingale created this Life Tributes page to make it easy to share your memories.

Alice Ella Walbolt Nightingale was born in Waterville, Ohio on...