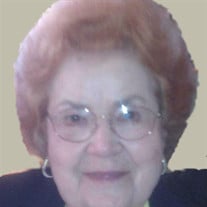 Alice V. Verock, age 97, of Toledo, Ohio died peacefully on Friday, November 23, 2018 at Aspen Grove in Lambertville, Michigan. She was born September 9, 1921 in Toledo, Ohio to Pearl and Anthony Suwinski. Alice graduated from Saint Anthony’s grade school and was a 1940 graduate of Libby High School. She graduated from Warner Beauty College and owned her beauty salon on Junction Ave. in her early 20’s, where her sister Esther worked with her. Alice also worked at several different salons during her long career. She retired in 1998 at the age of 77. She was a long-time parishioner of Christ the King Church of Toledo, and also enjoyed traveling to The Shrine in Carey Ohio every October for over 50 years. She was an active member in the Altar& Rosary Society for the church. In her younger years Alice loved to go dancing at the old Palidrome, and she also loved to bowl. In her later years she would enjoy going to bingo and doing some traveling. Alice was a perfectionist at whatever she did. She might have been tough on the outside but had a heart of gold on the inside. Her feisty spirit will be missed by all who knew her. Alice was preceded in death by her parents, her husband Joseph L. Verock, brother and sister-in-law, Frank and Marie Suwinski, brothers-in-law Morris Lajiness, and Donald Gibel. Survived by her sisters, Esther Lajiness and Christine Gibel, nieces Denise (Timothy) Powers, Julie (Robert) Neidhardt, nephews Christopher (Sherry) Lajiness, Duane Gibel, David (Allison) Gibel, Anthony (Darcy) Suwinski, five great nieces, five great nephews, three great great nieces and one great great nephew. Alice’s family would like to extend a special thank you to Aspen Grove, and all of her care givers. Also, to the wonderful, caring hospice nurses who made her last hours the most peaceful. Family and friends will be received at Christ the King Church , 4100 Harvest Lane, on Saturday, December 1, 2018 from 10:00AM until her funeral mass commences at 11:00AM. Burial will follow at Calvary Cemetery. In lieu of flowers, the family is asking donations be made to Hospice of Northwest Ohio or Christ the King Church. Arrangements entrusted to Ansberg-West Funeral Directors (419) 472-7633.

The family of Alice V Verock created this Life Tributes page to make it easy to share your memories.