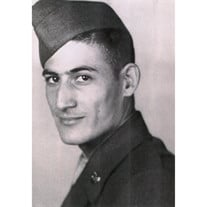 Andreas Dionyssiou, co-owner of Rudy’s Hot Dog, passed away peacefully on the July 20, 2017. He was born November 26, 1928 in the village Sysklipos, Cyprus. He was the son of Polexeni and Dionyssios Hadgiharalambou . In the late 1940’s Andreas, or as his friends called him Andy, left his homeland of Cyprus and immigrated to the United States. Soon after, Andy met the love of his life Joan Richardson. They married in 1951. Immediately after marriage, Andy was drafted into the Korean War serving his country bravely with an honorable discharge as Sergeant in the United States Army. Andy and Joan had two children Daniel and Paula. Their family grew to include 5 grandchildren and 6 great grandchildren all of whom Andy loved deeply, never missing a chance to spend time with them. After discharge from the Army, Andreas joined his uncles, Rudy and Gus, in a small business adventure. Later he partnered with his brother Harry to lay the foundation of the successful Rudy’s Hot Dog. The original location on the corner of Sylvania and Lewis, where Andy spent most of his time, is a staple of the community. Up until his death, he could be seen cooking and greeting customers with his infectious smile. Being able to say hello and talk to his loyal patrons brought Andy so much joy. The business now includes 6 locations in the Toledo area. Andy along with all of his business partners continue the long family tradition of the Rudy’s Hot Dog brand and commitment to their customers. As patriarch of the family, Andy was instrumental in the sponsorship of many family members and friends to the United States including siblings, nephews, nieces, and cousins. Many of these beloved family members aided in the success of Rudy’s Hot Dog. Andy truly believed that no matter how distant family should stick together. Not only was Andy dedicated to his family and business, he also was dedicated to his church- Holy Trinity Greek Orthodox Cathedral. Andy was active in several organizations. He held a lifetime membership to AHEPA and was a former president of the Parish Council. During his office he was instrumental with his business dealings in acquiring adjacent property’s that facilitated the expansion of what the Greek community is today. Andy shared his love of cooking with his fellow parishioners and community. He led the kitchen staff in preparing meals for many church functions- most notably the annual Philoptochos Vasilopita and Greek Festival. Andy also held memberships to the Masons, Shriners, and Conn-Wiesenberger American Legion Post. Giving back to the community was very dear to his heart. Andy’s most beloved pastimes were spending time by the ocean, hunting, and traveling. In the winter months Andy enjoyed time spent at his condo, The Caribe in Lauderdale by the Sea, Florida. He owned the condo for 46 years where he loved enjoyed time with his family and countless close friends. There, he especially loved walks on the beach, shelling with his daughter Paula, and having numerous friends and family visit. His annual barbeque that had been hosted by he and his wife for 40 plus years, was a special event in which he would bring his famous Rudy’s hot dogs and chili that all looked forward to as a winter tradition. This past year, he was honored with a Rudy’s hot dog theme party in recognition of all of his years of party planning by the men’s and woman’s association of the Carbe. Big game hunting was always a passion of Andy’s as he took many expeditions throughout the United States and Canada with his nephews, grandson in law and close friends. Andy and Joan took many trips around the world, capturing many of the world’s treasures together including Egypt, Greece, Spain and Caribbean. Andy was an avid golfer, participating in multiple tournaments yearly with his grandson Michael as well as other friends and family. At the end of long days, Andy would retreat to his garden. Through growing flowers, vegetables and fruits, including the most 8 amazing figs from his Cyprus and Portugal, Andy would find relaxation. He felt connected to his father who tended fields and his brothers who shared his passion. Andy found joy in watching his great- grandchildren as they visited and picked their favorites. Andreas is preceded in his death by his parents, son Daniel, grandson Andreas, Sisters Cassianni, Melpomeni, Nafsika, and brother, Socrates. He is survived by his wife of 65 years Joan, daughter Paula, grandchildren: Mara (Randy), Andrea (Adam), Anthony, and Michael, 6 great-grandchildren, and brother Harry, treasured nieces and nephews, and friends. The family would like to send a special thanks to you Promedica Hospice especially Lisa, Wendy, and Wanda for the tender and most sincere care Andy received. Friends are invited to visit on Monday, July 24, 2016, from 2-9 p.m. in the Ansberg-West Funeral Home, 3000 W. Sylvania Ave., where Trisagion Prayers will begin at 7:00 p.m. Funeral services will begin on Tuesday at 10:00 a.m. at the Holy Trinity Greek Orthodox Cathedral, 740 N. Superior St. Rev. Larry Legakis Officiant. Interment will follow at Toledo Memorial Park Cemetery. Those wishing to make memorial donations are asked to consider Holy Trinity Greek Orthodox Cathedral. Those wishing to send his family online condolences are may do so at www.ansberg-west.com.

The family of Andreas Dionyssiou created this Life Tributes page to make it easy to share your memories.