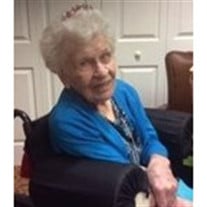 Our beloved mother, Anita Marie Lehman passed away on December 28, 2017 at age 98. Her husband and love of her life, Richard Leroy Lehman, Sr., preceded her in death in 1996. Anita was born in Defiance, Ohio, on January 17, 1919. She was an active and loyal Toledo resident until 1971, when Richard and she became residents in Tarpon Springs, Florida, where they lived as founding members at Innisbrook Golf Resort. Anita is a 1936 graduate of DeVilbiss High School, Toledo. She is also a proud graduate of Miami University in Oxford, Ohio (class of 1940). She was an inductee in Sigma Delta Pi National Spanish Honorary at Miami and an active member of Delta Gamma sorority. Two organizations she supported all her life are the PEO Sisterhood (chapters AY and FL) and the D.A.R. In both Toledo and Clearwater, Florida. She was a member of Sylvania Country Club, where she was a fine competitive golfer. She was a member of the Ben Hogan Hole-In-One-Club. In Florida, she loved her church, North Bay Community Church in Palm Harbor. Anita's love of music, particularly piano, thrived all her life. At age 90 she recorded Chopin and Rachmaninoff selections on a keepsake CD. Anita's was a well-rounded life well-lived, rich in spiritual, artistic, and athletic endeavors. Anita's deep love for her family will be sadly missed but will nurture them all their lives. Her children and their families were never far from her thoughts, and were always her pride and joy. Through all of life's peaks and valleys, she remained a steadfast source of common sense and loving support. Anita is survived by Suzanne (Ned) M. Walsh, Ukiah, California; Richard (Carol) L. Lehman, Jr., Tarpon Springs, Florida; Christy (George, deceased) W. Lumm, Newport News, Virginia; five grandchildren, Jonah Walsh and Sarah Walsh O'Sullivan, Christopher Lehman, Sean Beck, Conrad Lumm); and six great-grandchildren, Nadia and Dylan Walsh, Fiona O'Sullivan, Troy and Tanya Beckand one great-great-granddaughter, Norah Berkowitz. Anita's family would like to extend an especially warm and deep thanks to the entire staff at Brookdale Adult Care center, Tarpon Springs, and the wonderful Pearl team at Empath Hospice Care, Clearwater; Debbie Langrock of Preferred Care at Home. Bequests can be given in memory of Anita Lehman to Monroe Street Methodist Church (3613 Monroe St, Toledo, OH 43606), and Empath Hospice (Suncoast Care Center North, 164 West Lake Road, Palm Harbor, FL, 34684). Services will take place at Monroe Street Methodist Church at 2 p.m. on Sunday, January 14 in the sanctuary. Arrangements entrusted to Ansberg-West Funeral Directors.

Our beloved mother, Anita Marie Lehman passed away on December 28, 2017 at age 98. Her husband and love of her life, Richard Leroy Lehman, Sr., preceded her in death in 1996. Anita was born in Defiance, Ohio, on January 17, 1919. She was an... View Obituary & Service Information

The family of Anita Marie Lehman created this Life Tributes page to make it easy to share your memories.

Our beloved mother, Anita Marie Lehman passed away on December...