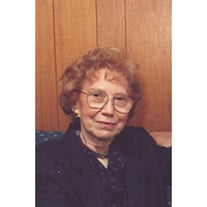 Ann Louise (Bettinger) Kotecki, 89, went home to be with her true home in heaven to be with Jesus and His family of Saints on October 6, 2008. Ann was born in Berkey Ohio on August 2, 1919 to Romain and Laura Bettinger. She was raised there on a farm until her graduation from Metamora High School. She then traveled to Chicago tot study fashion design at The Vogue School of Design. Ann later returned to Toledo and worked at the former Lamson's Department Store and then later at Jacobson's in the designer dress salon. Ann met her future husband Dr. Anthony Kotecki, a local dentist, through her sister Mary McGrane. She raised her three children with the help of her sister Pauline Bettinger after her husband was tragically killed in an auto accident at the age of 42. She was a Third Order Carmelite and had a great devotion to Our Lady and her rosary. Ann was a past president of Ladyfield mother's club and was also secretary of the Toledo Dental Auxiliary. Ann was a devoted mother and loving grandmother. She was preceded in death by her husband Dr. Anthony Kotecki; sisters, Mary McGrane, Pauline Bettinger, and Bernita Guerin. She is survived by her son, Anthony Kotecki; daughters, Andrea Kotecki (Michael) Newman, and Aimee Kotecki; grandsons Michael Newman O.S.F.S., John Newman, and Joseph Newman n/O.S.F.S., two nieces and five nephews. Ann will be greatly missed by all who knew her and will forever remain lovingly in our hearts. We love you mom! Friends are invited to visit on Thursday from 4:00-8:00PM in the Ansberg-West Funeral Home, 3000 Sylvania Avenue where a recitation of the Rosary will begin at 7:00PM. Prayers will begin in the funeral home at 9:30AM on Friday immediately followed by a funeral mass beginning at 10:00AM at Christ the King Church. Rev. Ronald Olszewski Officiant. Interment in Calvary Cemetery. Those wishing to make memorial contributions are asked to consider Christ the King Church or the Oblates of St. Francis de Sales.

Ann Louise (Bettinger) Kotecki, 89, went home to be with her true home in heaven to be with Jesus and His family of Saints on October 6, 2008. Ann was born in Berkey Ohio on August 2, 1919 to Romain and Laura Bettinger. She was raised there... View Obituary & Service Information

The family of Ann Louise Kotecki created this Life Tributes page to make it easy to share your memories.