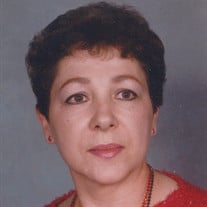 Anna (Nora) Deerwester-Shanahan, age 87,of Toledo, passed away on October 6,2021 with her children at her bedside. Nora was born May 30, 1934 in Trieste, Italy. On May 11, 1954, Nora married Kenneth Deerwester in Torino, Italy, where he was serving in the US Army. Once discharged, they moved to Toledo, Ohio, raised two children and after 31 years, they divorced in 1985. Nora later met and married Harold Shanahan on January 3, 1992. Nora was preceded in death by Kenny and Hal, brothers Aldo and Enrico and special friend/sister-in-law, Betty Hendrickson. Nora is survived by her children, Linda Ruiz (Gilberto), David Deerwester (Lori); grandchildren Erik Ruiz (Sarah), Ryan Ruiz (Lindsay), Kandyce Ruiz-Queenan (Kraig), and Brittney Rose; great-grandchildern, Meghan, Benjamin, Camrom, Kelsie, Trae and Miles. A special thank you to the staff at Parkcliffe Memory Care Community where Nora has resided since 2013. She will be interned at Ottawa Hills Memorial Park Mausoleum. At Nora`s request there will be no visitation.

Anna (Nora) Deerwester-Shanahan, age 87,of Toledo, passed away on October 6,2021 with her children at her... View Obituary & Service Information

The family of Anna "Nora" E. Deerwester-Shanahan created this Life Tributes page to make it easy to share your memories.