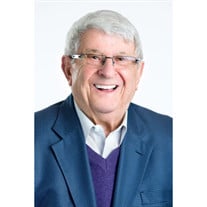 Anthony J. Falzone February 13, 1933 - July 16, 2017 Anthony “Tony” Falzone passed away peacefully on July 16, 2017. At the age of 84 he was still the ornery, take charge force that touched the lives of everyone he met. Beneath that tough Sicilian exterior was a man with a generous heart and an immeasurable love for life. He was a successful builder and developer who left his mark in many places throughout Toledo. He was most proud of the ProMedica Mary Ellen Falzone Diabetes Center named in honor of his daughter Meme who passed away at the age of 14 from undiagnosed diabetes. Tony had a dream and a vision of providing easy access to comprehensive care for those living with the challenges of diabetes. With the help of ProMedica and many, many friends his vision was realized with the opening of the Center in 2014. More than 400 patients find care and support there every single day thanks to Tony’s vision. Many people have their favorite “Tony Falzone stories.” They might be related to gin games, golf, travel, building and design projects, eating adventures — you name it! And although technically not born into “royalty,” his friends would tell you he always wore the “crown of royalty” which was consistently confirmed through his beverage of choice … Crown Royal! When Tony was around, he naturally commanded a room. And you knew he really liked you when he peppered his conversation with jibs and jabs and he especially liked it when you threw a jab back at him!! Successful businessman, phenomenal friend, loving husband … all descriptions of Tony but the one he was most proud of is how his daughters describe him … “BEST DAD EVER!!” And, there are countless people who would confirm that he was also the best ever “adopted Dad” - he filled that role in the hearts of many. Tony is survived by his loving wife of 35 years, Mary Lou Falzone; his daughters Patty Falzone Narges (Jerry) and Sue Falzone Jablonski; two granddaughters Lisa Salisbury (Jeff) and Kristan Onofrio (Kevin) and brother Vincent Falzone. He was preceded in death by his daughter Mary Ellen, parents Louis and Catherine, and siblings Polly, Ann, James and Louise. There are a number of ways you can continue to celebrate Tony’s life. For starters, have a Crown Royal with the purest of water! Or maybe pick up the check for dinner with friends - he was the master of that! And if you really want to honor him consider a gift to the Mary Ellen Falzone Diabetes Center - ProMedica Foundation. Help us to keep his vision alive for all of those living with diabetes. Tony’s family and friends will celebrate his life in a manner he literally dictated in his Last Will and Testament. There will be a short service at the Historic Church of St. Patrick’s, 130 Avondale Avenue at 12:30 p.m. on July 30 immediately followed by one helluva party for friends and family at Sylvania Country Club, no tie required! We have no doubt he is smiling down on all of us now, sharing the story of the Diabetes Center with Meme and of course, drinking Crown!

The family of Anthony Falzone created this Life Tributes page to make it easy to share your memories.