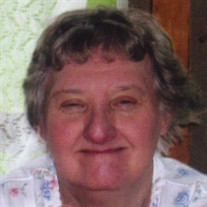 Barbara A. Samsel was welcomed into the loving arms of Jesus on February 7, 2018, which was the 27th anniversary of her mother’s death. She was born on October 15, 1940 in Toledo to Clarence and Mildred (Churchill) Priebe. Her catholic faith was the center of her life. She had a special love and devotion to our Blessed Mother, Mary. She prayed the Rosary daily. She enjoyed singing and playing the organ. In her youth, she would attend TCCY dances, where she met her future husband, David P. Samsel. They were married on January 18, 1964 in St. Ann’s Church. They spent their time together at Round and Square dances. Together they raised 4 beautiful children. She loved her children and especially her grandchildren. They brought such joy to her life. She often said “I only have 3, but I have the best. I may not have quantity, but I have quality.” She was so proud of them and all they did. Barbara was preceded in death by her parents, husband and brother, Richard Priebe. She is survived by her children, Thomas Samsel, Darlene Samsel, Laura (Chris) Solly, Kevin Samsel; grandchildren, Christopher, Ashley, Kaitlyn Solly; sisters, Marilyn King and Kathy Bonfiglio. Mass of the Christian Burial will be celebrated 11:00a.m. Monday, February 12, 2018 at Most Blessed Sacrament Church, where friends are invited to visit after 10:00a.m. Visitation will be held from 2:00p.m. to 8:00p.m. Sunday, at Ansberg-West Funeral Home, 3000 Sylvania Avenue, where a scripture service will be held at 7:00p.m. Memorial contributions may be made to the family.

Barbara A. Samsel was welcomed into the loving arms of Jesus on February 7, 2018, which was the 27th anniversary of her mother&#8217;s death. She was born on October 15, 1940 in Toledo to Clarence and Mildred (Churchill) Priebe. Her catholic... View Obituary & Service Information

The family of Barbara A. Samsel created this Life Tributes page to make it easy to share your memories.

Barbara A. Samsel was welcomed into the loving arms of Jesus...