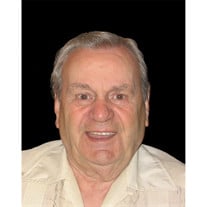 Bernard James Ross, age 88, passed away Sunday June 18, 2017. Bernie was born January 23, 1929 to Susie (Stump) and Fred Ross in Toledo. Upon his graduation from Libbey High School, Bernie started his career as a Merchant Seaman, where he retired as a Chief Engineer, while toiling in engine rooms, on many ships, on many seas. Due to financial constraints as a child, Bernie and many of his 10 siblings traversed through other extended family members and orphanages (the old Miami Children's Home included). Bernie's first 2 years of high school were spent living with his aunts in Lancaster, OH. He was proud of playing football for Lancaster High School and being a thorn in the side of then national football powerhouse, Massillon High School. Bernie also boxed (Golden Gloves) in his youth. The Ohio State Buckeye football teams were also his joy. His career was kickstarted after a congressional appointment to the Merchant Marine/Coast Guard Academy to hone his trade. Upon graduation in 1964 in Jacksonville, FL to secure his Chief Engineer license, he became the youngest Chief Engineer in the US Merchant Marines. Not a continent nor ocean was left untouched by Bernie's travels. Bernie also taught and was an instructor at many maritime academies throughout the country. Bernie was a proud man and proud of his family. He is survived by his sons, Mark (M. Ross Michaels) of Palm Springs, CA, Dean (Carmenita) Ross of Toledo, Scott (Kathy) Ross of Hilliard, OH, Tracy (Tami) Ross of Paish, FL; daughter, Dawn (Phil Leo) of Las Vegas, NV; his loving companion of 33 years, Marcine Bloom and sister, Jill Wilson of Gibsonburg, OH. Bernie is also survived by 6 grandchildren; 2 great-grandchildren; many nieces, nephews; and the Bloom girls, Patti, Linda, Donna and Terry. He was preceded in death by his parents; ex-wife, Frances Plocek; grandson, Lamar Ross and his many brothers and sisters. The family would like to thank the Ohio Living Hospice and caregivers (Gwen and others). Friends are invited to visit after 1:00 p.m. Wednesday at Ansberg-West Funeral Home, 3000 Sylvania Avenue, where services will commence at 7:00 p.m.

Bernard James Ross, age 88, passed away Sunday June 18, 2017. Bernie was born January 23, 1929 to Susie (Stump) and Fred Ross in Toledo. Upon his graduation from Libbey High School, Bernie started his career as a Merchant Seaman, where he retired... View Obituary & Service Information

The family of Bernard J. Ross created this Life Tributes page to make it easy to share your memories.