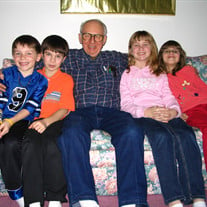 Bernard R. Schneider Sr., 88, passed away March 26, 2014 at his home. He was born July 7, 1925 to Bernard B. and Rose (Heft) Schneider in Toledo. He lived in North Toledo as a youth and attended Woodward and Macomber graduating in 1943. Bernie enlisted in the Coast Guard during WWII; however, Rheumatic Fever resulted in him being hospitalized for a lengthy time. He held many jobs throughout his life including working for Chevrolet and for LOF Glass for 28 years before retiring in 1982. Bernie married Dorothy C. O’Connell in 1957. They had 2 children, Bob and Richard. Through the years, they enjoyed travelling together, going to fairs and festivals, and spending time with family and friends. Bernie was Dorothy’s caregiver late in her life, and never missed a day visiting and attending to her in the nursing home until her passing in 2005. Bernie was an avid outdoorsman. He would go fishing, hunting and trapping as a youth with his father. He was active in the Boy Scouts and in Junior Achievement, and enjoyed bowling and playing cards. In his later years, he enjoyed walking at Wildwood Preserve Metropark observing the wildlife, and was always eager to share and help others appreciate what he saw. Bernie is survived by his sons, Bob and Richard (Bonnie); four grandchildren (Greg, Liz, Kaylee, Eric); sisters, Eleanor Shepard, Carol (David) Beazley; and many nieces and nephews. In addition to Dorothy, he was preceded in death by his daughter- in- law Amy Schneider, brother- in- law Raymond Shepard, and sister-in-law Joan O’Connell. The family would like to thank Bernie’s neighbors for their heartfelt compassion and for the generous assistance provided to him over the past several years. Friends are invited to visit from 2:00pm to 6:00pm Sunday at the Ansberg-West Funeral Home 3000 Sylvania Avenue. Interment will be in Toledo Memorial Park. In lieu of flowers, memorial contributions may be made to the Toledo Metroparks or the American Parkinson Disease Association. Online condolences may be left for the family at www.ansberg-west.com

Bernard R. Schneider Sr., 88, passed away March 26, 2014 at his home. He was born July 7, 1925 to Bernard B. and Rose (Heft) Schneider in Toledo. He lived in North Toledo as a youth and attended Woodward and Macomber graduating in 1943. Bernie... View Obituary & Service Information

The family of Bernard R Schneider created this Life Tributes page to make it easy to share your memories.