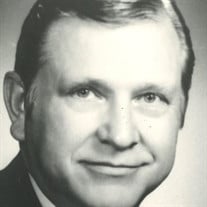 Bernard Eugene Thompson, age 94, of Toledo, Ohio & The Villages, Florida, died peacefully on July 10, 2020 in Toledo, Ohio surrounded by his family. Bernie was born in Bedford Township, Michigan to Myron and Cora (Armitage) Thompson on April 19, 1926 and was the youngest of four children. He joined the United States Navy at the age of 17. He served his country as a Signalman aboard the USS Fanshaw Bay (CVE-70), an aircraft carrier. Active duty: April 25, 1944 to July 6, 1947 (honorable discharge). In 1953, Bernie was employed by the Internal Revenue Service, where he spent 23 years in government service. He retired as a Special Agent of the Treasury Department of the IRS. He continued working in security and investigations until becoming a real estate agent before retiring from the workforce permanently. Bernie is preceded in death by his son, Jeffrey (Neil). He is survived by his loving, devoted, wife and companion of 20 years, Gloria; his children, Kathleen (Gary), David (Toni) & Patrick (Sandra) from his first wife Patricia; his children, Phillip (Teresa), Kevin (Kristina) & Timothy, from his third wife, Peggy; his 10 grandchildren, 18 great-grandchildren and two great-great-grandchildren; and his nieces and nephews. Bernie was admired and respected for his sound advice and ever-present humor. He demonstrated honesty, courage and perseverance. Even in adversity, he maintained a pleasant and positive attitude. He claimed to owe his longevity to two martinis a day (his preferred beverage) and his favorite saying was, “One’s not enough and three’s too many.” In addition to spending time with his family in Ohio, where he regularly attended “boy’s night,” Bernie treasured his Florida home, where he enjoyed kicking back at the top of the hill and dancing in Towne Square. Bernie aka “Gramps” aka “The Patriarch” will be sorely missed and warmly remembered by all. Funeral services will be held on Thursday, July 16, 2020 at 11:00am at Ansberg-West. Burial will follow at Ottawa Hills Memorial Park. Private, family visitation is 1:00-2:00pm on Wednesday, July 15, 2020 followed by public visitation from 2:00-8:00pm at Ansberg-West.

The family of Bernard Eugene Thompson created this Life Tributes page to make it easy to share your memories.