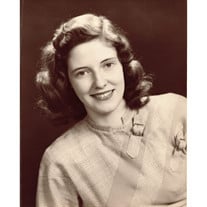 Bernice G. Tremblay, 91, of Maumee Ohio, passed away peacefully at St. Luke’s Hospital on Monday, March 2, 2015. She was born on July 24, 1923 to Gordon and Sophia Verrall in Buffalo New York. There she attended high school and worked in the local theatre where she met some of the greatest entertainers of her time. She was introduced to Virgil Tremblay by her friend, Violet, who happened to be Virgil’s sister. They were married on June 12, 1943 in Athens, Georgia where Virgil was stationed as a Navy pilot instructor. Virgil’s assignments took them to Memphis, Tennessee, and Corpus Christi, Texas. Following the war they settled in Jellico, Tennessee, with their infant son Michael. There Bernice helped cook and run the family restaurant and bus station. After a while, the family moved back to Buffalo, New York, where their son John was born. Life for the family took many turns and ultimately they ended up in the Toledo area where Bernice worked as a sales representative for the B.R.Baker Department Store and became a member of The First Baptist Church where she sang in the choir and helped with Sunday School. Bernice was a lover of life. She never knew a stranger and genuinely cared about every person that she met, befriending and charming them with her quick wit and infectious smile. Friends and family were always welcome into her home enjoying fabulous parties, delicious dinners or just plain coffee and dessert. She had a special place in her heart for all children and her many family pets. Her greatest joy came from spending time with her loving family whether at holiday gatherings, sprots events, or the many travels to Buffalo, Tennessee, and Florida. She continued to remain active in her later years she could be found on her daily outing to local stores bantering with her friends. She was a strong woman and an inspiration overcoming years of multiple gastric procedures and blood transfusions without a complaint. After Virgil’s death in 2014, she continued to live alone at home until her decline in August when she became a resident of Lutheran Village at Wolf Creek. “Ma” will be remembered as a dedicated and loving wife, mother, grandmother, and great-grandmother. She was preceded in death by her parents and husband of over 70 years, Virgil. She is survived by her sons, Michael (Monique) and John (Cheryl); grandsons, Timothy, Chad, Mathew, Christopher; great-grandsons, Jonah and Jacob. Her family wishes to extend their deep gratitude for the wonderful medical care provided by Dr. Randy Climo, St. Luke’s Hospital, and Northwest Ohio Gastroenterology Associates. Sincere thanks are also extended to dedicated friends, Tom and Flossie Townsend, Al Kern, Tome and Kathy Young, as well as all of her other faithful friends throughout the years. Bernice’s family will receive friends at First Baptist Church, 6520 Pilliod Rd, Holland Ohio on Saturday, May 2, 2015 at 10:00am prior to the memorial service at 11:30am with a luncheon at the church to follow. A private family burial will take place in Jellico, Tennessee this summer. Memorial contributions may be made to First Baptist Church. Arrangements have been entrusted to the Ansberg-West Funeral Directors, 419-472-7633. To send her family online condolences, please visit www.ansberg-west.com

Bernice G. Tremblay, 91, of Maumee Ohio, passed away peacefully at St. Luke&#8217;s Hospital on Monday, March 2, 2015. She was born on July 24, 1923 to Gordon and Sophia Verrall in Buffalo New York. There she attended high school and worked... View Obituary & Service Information

The family of Bernice G. Tremblay created this Life Tributes page to make it easy to share your memories.