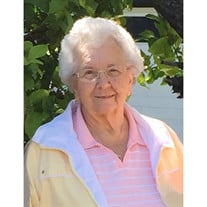 Betty Jean Noward-Smith, 92, of Toledo was called home to be with her Lord on Tuesday, March 29, 2016 with many of her loving family by her side. She was born on March 17, 1924 in Ithaca, Michigan to Clark & Rhea Thomas. After living most of her childhood in Haskins, Ohio, the family moved to Lynchburg, Virginia; where she graduated from high school. On April 19, 1945 she married Harold Milton Noward in Bowling Green,Ohio.. From 1944 to 1952 she worked at the Rossford Ordinance Department. For the next 15 years she taught the Good News Club and also became the Sunday School director for the primary department at Emmanuel Baptist Church until 1975. In 1968 she came to be the secretary for Emmanuel Baptist Christian School for 21 years where she retired in 1989. Betty was a very active member of Emmanuel Baptist Church for 69 years. Betty’s love and compassion for everyone was evident in everything she did throughout her life, from her mentoring young women to teaching children in the church, displaying for all her love of God. She had a keen wit, ready laugh, and loved spending time with her family playing games. She was an avid sports fan and enjoyed going to sporting events and watching them at home with her husband. She was preceded in death by her husband of 52 years, Harold; her parents (Clark Thomas & Rhea Thomas, whom she took care of until her death in 2002) and two brothers, William and Jerry Thomas. She is survived by her daughter, Beth Ann (Roger) McCarty; grandchildren: Christopher (Krista), Michael (Rachel), Shaun (Julie), Nicole, and Joshua; and 7 great-grandchildren: Noah, Olivia, Luke, Cooper, Lucey, Brooklyn, and Piper. In 2010 she married Ronald R. Smith who survives her along with his children, Gary (Dec)(Brenda) Smith, Sandra (Douglas) Leopold, Charles (Darcy) Smith; 7 grandchildren and 14 great-grandchildren. Friends are invited to visit from 4:00pm to 7:00pm Thursday at Ansberg-West Funeral Home, 3000 Sylvania Avenue. A celebration of Betty’s life will be held 11:00am Friday at Emmanuel Baptist Church, 4207 Laskey Road, Toledo. Memorial contributions may be made to the Emmanuel Christian School Scholarship Fund in lieu of flowers. Condolences for Betty’s family may be expressed online at www.ansberg-west.com

Betty Jean Noward-Smith, 92, of Toledo was called home to be with her Lord on Tuesday, March 29, 2016 with many of her loving family by her side. She was born on March 17, 1924 in Ithaca, Michigan to Clark & Rhea Thomas. After living most of... View Obituary & Service Information

The family of Betty Jean Noward-Smith created this Life Tributes page to make it easy to share your memories.

Betty Jean Noward-Smith, 92, of Toledo was called home to be...