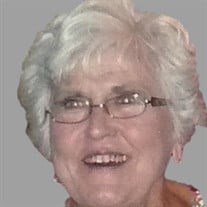 Betty Snyder was welcomed into the arms of the Lord on Friday, January 29, 2021. Betty was born on September 14, 1941 in Toledo, Ohio, to Thelma Gingrich and Harold Gingrich. Betty grew up in the Old West End of Toledo and went to Scott High School and later moved to South Toledo where she graduated from Rogers High School. It was there that she caught the eye of her backyard neighbor Kenny Snyder and began dating. They married in September of 1960 at The First Baptist Church of Greater Toledo. They celebrated 51 years of marriage until Kenny’s passing in 2012. They were blessed with four children, Denise (Rick) Pitt of Scottsdale, Arizona; Deborah (Jim) Gilcher of Perrysburg, Ohio; Scott (Jackie) Snyder and Lauri Hardison of Bowling Green, Ohio. Betty was a devoted wife, mother and grandmother and was dearly loved by all of her children and grandchildren. She was over the moon when her first grandchild was born and even battled a near blizzard to be present at her birth. Lexi Cansler-Pitt, Ben Pitt, Andrew and Anthony Fitch, Beth (Hardison) Govan, Austin and Taylor Gilcher, Jack and Alisa Snyder, lovingly called her “Betty Boop” and each have many tales of fun times both great and small. They often said “what happened at grandma’s stays at grandma’s.” They love to reminisce about grandma in her convertible car coming over for their next adventure. Betty loved to travel, and visited most of the United States on car trips with Kenny and the kids. She and Kenny loved to fly to new places and visited Hawaii, Bahamas, Germany and Spain. A favorite destination was North Shore, California where she visited her parents and enjoyed dune buggying and sightseeing all over Southern California. Later, she would visit her children’s homes in Arizona where she would worship the sun and her sweet grandchildren. Betty was an avid gardener and loved to spend time in her vegetable and flower garden. Her roses and peonies were the envy of her neighbors and her garden produced enough vegetables to feed the neighborhood. She loved to can, bake and sew and had a large catalog of Christmas cookie recipes that she would bake each Christmas. Betty was a kind soul and spent much of her life volunteering her time helping others. Neighbors, friends, organizations were all beneficiaries of her volunteerism. Betty and Kenny enjoyed bringing joy to others as Mr. and Mrs. Claus passing out toys and candy canes wherever they traveled. She took several mission trips to Australia, Philippines and the Carribean with her church. She was a member of The First Baptist Church of Greater Toledo for 79 years. She was always involved in the music program playing in the bell choir and singing in the choir. She would sing solos in church and many of her children’s weddings. Due to Covid-19 restrictions, a private interment service will be held, and an announcement for a celebration of life will be made at a later date. In lieu of flowers, contributions in memory of Betty may be made to the Alzheimer’s Association, or The First Baptist Church of Greater Toledo, Holland, Ohio. Funeral arrangements are entrusted with the Ansberg -West Funeral Directors (419) 472-7633.

Betty Snyder was welcomed into the arms of the Lord on Friday, January 29, 2021. Betty was born on September 14, 1941 in Toledo, Ohio, to Thelma Gingrich and Harold Gingrich. Betty grew up in the Old West End of Toledo and went to Scott High... View Obituary & Service Information

The family of Betty Snyder created this Life Tributes page to make it easy to share your memories.

Betty Snyder was welcomed into the arms of the Lord on Friday,...