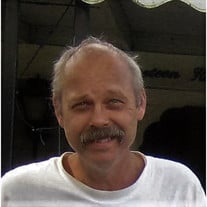 Bruce E. “DuBee” DuBell, 61, passed away suddenly on December 31, 2016. Bruce was born on August 1, 1955, to Helen (Bowman) and Robert DuBell. He was a graduate of the former Macomber High School and Ryder Technical Institute. He married the love of his life, Lori Kauffman on September 1, 1984. DuBee drove semi-truck for over 30 years hauling steel, auto parts, and chemicals, during those years. He enjoyed visiting his daughter and son-in-law in New York, reading, and hanging out on the front porch with friends and neighbors and drinking his beer. He is survived by his wife of 32 years, Lori, daughters, Jasmine (Timothy SGT) Hagerman and Genevieve DuBell; mother, Helen DuBell; brothers, Dennis (Marsha) DuBell and Ray DuBell; 4 nieces and a nephew, and 5 great-nieces and nephews. He was preceded in death by his father, Robert DuBell and brother, Robert DuBell Jr. and one great-niece. Friends may gather on Friday, from 11a.m. until the memorial service at 2 p.m., at the Ansberg-West Funeral Home, 3000 Sylvania Avenue, (between Secor and Douglas Roads). Interment will be in Historic Woodlawn Cemetery. Memorial contributions may be made to the American Heart Association, the Muscular Dystrophy Association or the donor’s favorite charity. Online condolences may be sent to the family at www.ansberg-west.com

The family of Bruce E, DuBell created this Life Tributes page to make it easy to share your memories.