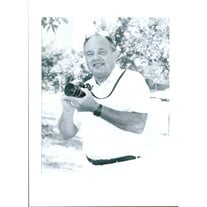 Bruce G. Sinner, an award winning photojournalist, died peacefully in his sleep on Friday, December 26th at Elizabeth Scott Community, Maumee, Ohio at age 91. He was born in Syracuse, N.Y. to Virginia (Maylender) and Harry Sinner on May 24, 1923. He attended the University of Toledo and enlisted in the Army Air Corp a week after the bombing of Pearl Harbor. While in the service he attended photography school and became an aerial photojournalist recording history. In 1946 he became a photojournalist for the Toledo Blade. He retired after 43 years of employment. During his career he was Chief photo director for several years and won many awards. He was always grateful for a wonderful career at the blade. He also took photographs for National Geographic, of the Alaska Pipeline during its construction, and covered some presidential campaigns. He taught Photography classes at the University of Toledo and loved all aspects of photography. Bruce was preceded in death by his loving wife of 46 years, Lora (Wagner) in 1988, his parents, sister Susan, stepchildren Bob, Scott and Laren McClain. He is survived by his loving wife of 22 years, Doris McClain, six children, Bruce Jr. (Bettye) Sinner, Lynda (Roger) Meyer, Carol (James) Henderson, Gail (Erik) Elbek, Steve (Kendra) Sinner, David Sinner, stepdaughter Lori McClain (Sheldon) Lutte and half-sister Margaret Gibney. He is survived by 16 grandchildren, 23 great-grandchildren, 4 step grandchildren and 9 step great-grandchildren. He thoroughly enjoyed his family, loved to entertain guest in his home or on his sailboat on Lake Erie. He gave of his time serving on church council at Bethany Lutheran Church. He had a wonderful sense of humor and is remembered by so many one liners that still keep us laughing. This man loved life and always thanked the good lord for being so good to him. He will be dearly missed by all who knew him. The family would like to thank Elizabeth Scott Community for the great care they gave Bruce the last two years. Memorials in his name are suggested to the Laren Kay McClain Scholarship Fund at the University of Toledo or the Toledo Humane Society. Friends are invited to visit after 11:00am on Friday January 2, 2015 in the Ansberg-West Funeral Home, 3000 W. Sylvania Ave. where funeral services will immediately follow at 1:00pm. Rev. James Henderson Officiant. Interment will be in Ottawa Hills Memorial Park Cemetery. To send his family online condolences, please visit www.ansberg-west.com.

Bruce G. Sinner, an award winning photojournalist, died peacefully in his sleep on Friday, December 26th at Elizabeth Scott Community, Maumee, Ohio at age 91. He was born in Syracuse, N.Y. to Virginia (Maylender) and Harry Sinner on May 24,... View Obituary & Service Information

The family of Bruce G. Sinner created this Life Tributes page to make it easy to share your memories.