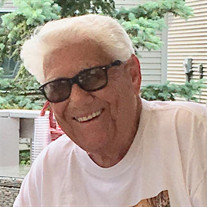 Dr. Carl R. Leistner, of Perrysburg, Ohio passed away on January 17, 2020. He was born on June 6, 1932 to Eleanor (Hamann) Leistner and Fritz Carl Leistner. He grew up in Point Place (Toledo) Ohio. He graduated from Waite High School, class of 1950, University of Toledo (Arts and Science) class of 1954, and graduated with a Doctorate of Dentistry from Ohio State's Universities College of Dentistry in 1958. He served as Vice President of his junior class and was elected as a member of Who's Who of universities and colleges. He was a lifelong member of the Toledo Elks Club, served as president of the South Toledo Kiwanis Club, was a member of the Masonic Order, Shriners, and Jesters. Dr. Leistner received the Dr. Ernest Bach Memorial Award for commitment to dentistry and community service, and served on the Toledo Dental Society Council for over ten years He was a well-respected dentist for over 57 years. Carl always had a magnificent personality. He was a people person and many of his patients came to him all of their live. An avid golfer, he shared his love for the game by sponsoring the Hardin-Leistner Invitational Golf Tournament for dentists throughout the state. He was a longtime member of Holy Trinity Lutheran Church. He was preceded in death by his wife of 58 years, Suzanne (Hiser) Leistner; daughters, Holly Sue Leistner and Gayanne (Leistner) Wunderlin; and sister, Anita Millburn. He is survived by his son, Dr. Timothy Leistner of Fort Lauderdale, Florida; granddaughter, Sara Suzanne Wunderlin; grandson, Luke Alex (Jessica) Wunderlin; great-grandchildren, Perrin Robert Wunderlin, Luna Anne Wunderlin, and Nova Elise Wunderlin; and brother, Ralph (Betsy) Leistner. A Christian memorial service will be held on Wednesday, January 22, 2020 at 11:00 a.m at Holy Trinity Lutheran Church, 1825 Glendale Avenue (At the Harvard Circle), Toledo, OH 43614. Phone: 419-382-5644. A luncheon will follow the service. The family is requesting any donations be made to Holy Trinity Lutheran Church. Arrangements have been entrusted to the Ansberg-West Funeral Directors, 419-472-7633.

Dr. Carl R. Leistner, of Perrysburg, Ohio passed away on January 17, 2020. He was born on June 6, 1932 to Eleanor (Hamann) Leistner and Fritz Carl Leistner. He grew up in Point Place (Toledo) Ohio. He graduated from Waite High School, class... View Obituary & Service Information

The family of Dr. Carl R. Leistner created this Life Tributes page to make it easy to share your memories.