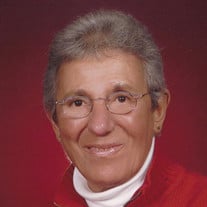 Catherine Geanopulos passed away peacefully at her niece’s home after a short illness. A lifelong Toledo resident, Catherine was born June 4, 1932 to Christ and Eftehea (Bitharas) Geanopulos. She chose hairstylist as a career, first owning her own shop, then employed by Flower Hospital, until finally settling in at Sunset House until her retirement in 2009. She also enjoyed working part-time at Crabtree and Evelyn at Franklin Park Mall, which she considered more fun than work. Catherine had a strong faith and was a longtime member of Holy Trinity Greek Orthodox Cathedral. She was a member of the Maids of Athena, Daughters of Penelope and Philoptochos. She enjoyed volunteering at the Greek festivals, lunches and memorial dinners. She was also a member of Young at Heart, where she enjoyed meeting new people, making good friends, cruising and travelling. In her younger days she loved to entertain in her home and travel to visit friends. Catherine was preceded in death by her parents, sister, Venus Takos; brother-in-law, John Takos and niece, Althea Takos Brooks. She is survived by her niece, Sophia Takos (Michael); nephew, George Takos (Julia); several great nieces and nephews and many longtime friends. Her niece would like to thank everyone that called, texted and sent cards during her short stay in Mentor. It truly did make her last days brighter. Friends are invited to visit after 10:00am Wednesday February 23, 2022 at Holy Trinity Greek Orthodox Cathedral, 740 N Superior St, Toledo, OH 43604, where services will commence at 11:00am. Interment will follow in Historic Woodlawn Cemetery. In lieu of flowers, memorial contributions may be made to Holy Trinity Greek Orthodox Cathedral.

Catherine Geanopulos passed away peacefully at her niece&#8217;s home after a short illness. A lifelong Toledo resident, Catherine was born June 4, 1932 to Christ and Eftehea (Bitharas) Geanopulos. She chose hairstylist as a career, first... View Obituary & Service Information

The family of Catherine Geanopulos created this Life Tributes page to make it easy to share your memories.

Catherine Geanopulos passed away peacefully at her niece’s home...