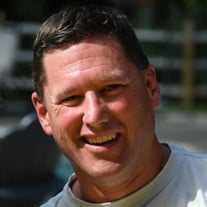 Chad Michael Haley, 51, of Sylvania passed away unexpectedly Friday October 8, 2021. He was born November 23, 1969 to Elwood (Woody) and Sharon Haley in Toledo. He grew up in Monroe, MI before moving to Sylvania in 1983 which he made his home for the rest of his life. Chad was a 1987 graduate of Northview High School and earned his bachelor’s degrees in business from Lourdes University in 1997. A proud alumnus he served on several boards and endowed two scholarships to the university. Chad was passionate and fully committed to everything that he did. He was an avid University of Michigan fan spending Saturday’s year after year at football games, most recently sitting at center ice cheering on the hockey team. Chad began working out regularly doing CrossFit and it became one of his most fond passions. Without fail you could find him working out daily at 5:00 AM. His enthusiasm for CrossFit spread to both Tyler and Logan along with other family and friends. Chad was actively involved with everything his sons did. Tyler was 7 years old when he and Chad began taking karate lessons and 3 years later, they both earned black belts. He always had to be involved in the action, where his love of photography led him to being the photographer for both St. John’s Jesuit Varsity and JV hockey teams. When it came time to relax, for Chad that could include shooting, sitting by the fire, drinking bourbon, with a cigar in hand, all the time chatting with friends trying to solve the world’s problems. Chad held very strong beliefs and convictions regarding his faith, family, and politics. Never one to shy way from discussion and debate. Chad possessed a great sense of humor! The more Chad teased you the more he liked you. Fiercely loyal to his family, friends and clients, his massive personality brought people together and he made strangers feel as though they were his longtime friends. Chad followed in his mother’s footsteps working in the personnel and recruiting sector. This led Chad to start his own business, Career Integration and Career Staffing. He was a career mentor to many. For professionals that knew Chad, he was the first person called when they needed career advice or were considering a career change. Chad’s entrepreneurial spirit was so strong that he helped Logan begin a lawnmowing business at the age of 9. Chad is survived by his loving wife, Kristie (Orth) Haley; sons, Logan and Tyler (wife Logan); brother, Allen (Maggie) Haley; Brian, Darin (Stacey), Eric (Laci) mother, Sharon (Don). Chad and Kristie were ready to celebrate their 20th wedding anniversary. Chad is preceded in death by his father. Friends are invited to visit from 4:00pm to 8:00pm Wednesday October 13, 2021 at Ansberg-West Funeral Home, 3000 Sylvania Avenue. Mass of the Resurrection will be celebrated 11:00am Thursday at St. Joseph’s, Sylvania where friends are invited to visit after 10:00am. Interment will follow in Toledo Memorial Park. In lieu of flowers please consider a contribution to the St. John’s Jesuit Hockey Team in Chad’s honor. https://sjjtoledo.org/make-a-gift/. Condolences for Chad’s family may be expressed online at www.ansberg-west.com

Chad Michael Haley, 51, of Sylvania passed away unexpectedly Friday October 8, 2021. He was born November 23, 1969 to Elwood (Woody) and Sharon Haley in Toledo. He grew up in Monroe, MI before moving to Sylvania in 1983 which he made his home... View Obituary & Service Information

The family of Chad Michael Haley created this Life Tributes page to make it easy to share your memories.