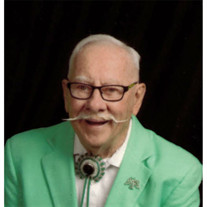 Charles Thomas Bowes, 85, passed away on Sunday, April 23, 2017, in Ebeid Hospice in Sylvania, OH. Charles was the son of Valentine and Florence Bowes, born in Toledo, OH, on May 12, 1931. The youngest of 8 children, he was affectionately known as Chuck or Charlie to friends and family. He graduated from Libbey High School in 1949, and served in the US Army from 1951 – 1953. After his return from service, he began a long career with A&P chain of grocery stores. On June 11, 1955, Chuck married Ann Wilbur Reis, who was his lover and best friend for over 59 years, and whom he now joins in heaven. Together they raised 3 sons, showing them full love and support, and showed the same love to their grandchildren that came along later. Chuck attended the University of Toledo as an adult student in the late sixties and early seventies. He earned a bachelor’s degree in Education in 1973, and taught in the Toledo Public Schools from 1974 until his retirement in 1997. He was known for his creative approach to education, his humor and dressing up in costumes on holidays - to the delight of his students. Former students still share fond memories of being in Mr. Bowes’ class. Chuck was a lifelong member of St. Lucas Lutheran Church, and played on the St. Lucas dartball team. He also enjoyed fishing and shooting, and was a member of Merickel-Farley Trout Club and Adams Conservation Club. In his younger days, he liked to cross-country ski when the weather allowed. With their children grown, Chuck and Ann could indulge their own interests in their retirement years. They loved traveling and camping in their motorhome, and were members of several camping clubs. A fun-loving couple, they spread joy and laughter wherever they went, making many friends throughout the U.S. In 2006, Chuck and Ann moved to Mayberry Village, a seniors’ community in Sylvania, OH. There they made many good friends who were a great comfort to Chuck when Ann passed away in 2015. Chuck loved playing cards and leading the weekly craft session at Mayberry Village. He is perhaps best known for telling a few jokes every Wednesday evening after the potluck dinner. Chuck was a man who always had a smile, a friendly word, a joke or story to brighten the day of others. He was preceded in death by his dear wife Ann, his mother, father, and seven siblings. He is survived by sons, John, Tim (Caren), and George; grandsons, Branden (Lauren) and Bryce (Kara); granddaughter, SuAnn; great-grandson Noah, and many, many beloved nieces and nephews Friends are invited to visit on Thursday, from 2-8 p.m., at the Ansberg-West Funeral Home, 3000 Sylvania Avenue, (between Secor and Douglas Roads), where funeral services will be held on Friday, at 11 a.m. Interment will follow at Ottawa Hills Memorial Park. Friends wishing to make a memorial contribution in Charlie’s honor are asked to contribute to either ProMedica Ebeid Hospice, 5340 Harroun Road, Sylvania, OH 43560 or St. Lucas Lutheran Church 745 Walbridge Avenue, Toledo, OH 43609. To send Chuck’s family online condolences, please visit www.ansberg-west.com

Charles Thomas Bowes, 85, passed away on Sunday, April 23, 2017, in Ebeid Hospice in Sylvania, OH. Charles was the son of Valentine and Florence Bowes, born in Toledo, OH, on May 12, 1931. The youngest of 8 children, he was affectionately known... View Obituary & Service Information

The family of Charles Thomas Bowes created this Life Tributes page to make it easy to share your memories.