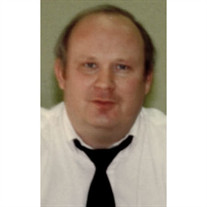 "Goin home, goin home by the waterside I will rest my bones, Listen to the river sing sweet songs to rock my soul." (Brokedown Palace, The Grateful Dead) Charles "Chuck" Shaffer of Toledo, Ohio passed away at home on Sunday, September 10, 2017. He was born in Toledo, Ohio on May 7, 1953. Chuck attended Blessed Sacrament Elementary School, St. Francis de Sales High School, and was a proud 1976 graduate of Marquette University in Milwaukee, Wisconsin. Chuck worked for the Lucas County Treasurers office from 1977 until 1990. For the past 27 years, Chuck was employed by Judge Jack Puffenberger as the court administrator for the Lucas County Probate Court. Chuck was preceded in death by his father, Russel E. Shaffer DDS, and his mother, Patricia Shaffer Greenen. He is survived by his brother, Russel Shaffer (Carol) and his sister, Barbara Nichols (Neal). Also surviving are his nieces, Laura Shaffer Restivo (James), Lisa Shaffer Mullen (Patrick), Elizabeth Shaffer Puffenbarger (Jason), Lauren Nichols (Neil Olsen), and nephew, Ross Nichols. Also left to cherish his memory are nine great-nieces who will miss him dearly. He will also be missed by his many friends in Probate Court. Chuck fought a courageous battle with diabetes and heart disease for many years. After months of recuperating from surgery, he was content to finally be at home (and enjoying his favorite diet Mountain Dew). Chuck was a very loyal Democrat who directed many political campaigns. He was proud of the candidates he helped to elect to public office. Chuck was happiest when riding one of his classic BSA motorcycles, watching Star Trek, or listening to his Grateful Dead albums. Thanksgiving dinner will not be the same without Uncle Chuck's famous stuffing. While those who loved him will miss him dearly, they are comforted by the many years of memories he created with them. Family and friends are invited to visit on Thursday from 3-8 p.m., at the Ansberg-West Funeral Home, 3000 Sylvania Avenue (between Secor and Douglas Roads). The funeral mass will be celebrated on Friday, at 10:30 a.m., at St Pius X Church, 2950 Ilger Avenue. Memorial contributions may be made to the American Diabetes Association or the American Heart Association.

"Goin home, goin home by the waterside I will rest my bones, Listen to the river sing sweet songs to rock my soul." (Brokedown Palace, The Grateful Dead) Charles "Chuck" Shaffer of Toledo, Ohio passed away at home on Sunday, September 10,... View Obituary & Service Information

The family of Charles Patrick Shaffer created this Life Tributes page to make it easy to share your memories.

&quot;Goin home, goin home by the waterside I will rest my bones,