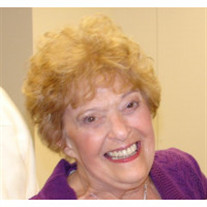 Charlotte” Joanne” Beavers, 77, most recently of Temperance Michigan, passed away early Tuesday morning, August 28, 2012, at Lake Park Hospice Facility in Sylvania, Ohio. Joanne was born May 8, 1935, in Widemouth, West Virginia, to Bernard and Beatrice (Daniels) Cook. She graduated from Pineville High School in 1953 and moved to Toledo where she married Robert “Bob” Beavers. Joanne was a devoted Christian mother, grandmother and great grandmother whose heart and arms were always open with southern hospitality to all who knew her. Joanne worked at Libbey Glass, but her God given passion was working as a cosmetologist. She was the owner/operator of the Rivera Salon where she touched people's lives by making them look their best physically and spiritually by teaching them the love of Jesus. Her motto was “Beauty is a woman's duty.” Joanne was preceded in death by her parents, brother Bernard “Bernie” Cook and brother-in-law William “Bill” Cook. She is survived by her sister, Bonnie Cook of New Port Richey, Florida, sister-in-law Charlene Cook, Toledo, sister-in-law, Pat Fulwider, Temperance, Michigan, by her children Bart (Ingrid) Beavers, Sylvania, Ohio, Scott (Julie) Beavers, Powell, Ohio, Keith Beavers, Caldwell, Ohio, by her grandchildren: Jennifer, Stephanie, Brooke, Hannah, Sarah and Emma Beavers and great granddaughter Allison Dubeansky. The family will be receiving friends Saturday September 8th at 10:00 AM with funeral services beginning at 11:30 AM at the Ansberg-West Funeral Home, 3000 Sylvania Avenue, Toledo, Ohio. A private burial will take place after the services. In lieu of flowers please direct memorials to Promedica Erie West Hospice 5855 Monroe Street, Sylvania, Ohio, or the charity of the donor's choice.

The family of Charlotte J. Beavers created this Life Tributes page to make it easy to share your memories.