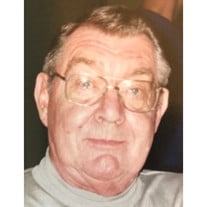 Clarence (Chuck) L. Schultz, 77 of Tolland, CT passed away on Saturday, June 10, 2017, peacefully with his family at his side. He was born in Toledo, OH on July 21, 1939. He graduated from Devilbiss High School and joined the U.S. Navy serving 4 years in Brunswick, ME. He worked for Pratt & Whitney and then Combustion Engineering until 1993. He enjoyed spending time with his family, fishing and boating. He spent many hours in his workshop fondly referred to as his "playpen". He was an avid reader and a CHEVY man. He was a WWII buff and could re-tell the history as if he had been there. He was a true American patriot of this country and the flag. He enjoyed several Navy VP10 reunions. Over the past years, Chuck struggled with many health and physical conditions. His courage and strength kept him going despite the odds always against him, he bounced-back. Dr. Michael Bey referred to him as a "medical miracle". He is pre-deceased by his parents, Clarence E. Schultz and Pearl I. (Stark) Schultz. Also, by his son, Kris A. Schultz. He is survived by his beloved wife of 43 years, Elaina D. (Surrell) Schultz, his daughters, Leann Morse of Ellington, CT, Merit Lajoie and her husband, Dan, of Tolland, CT, his daughter-in-law, Beth Schultz of Woolwich, ME, his grandchildren, Ashley McLaughlin and her husband, Sean of Tolland, CT, Nichole Rowley and her husband, Tyler of Lincoln, RI, Heather Soucy of Willington, CT, Ryan Watson and his wife, Natasha, of Stafford, CT, Stephanie Duplissie and her husband, Zak, of Cameron, NC, Charity, Laney and Samuel Schultz of Woolwich, ME, and his great-grand children, Gerard, Emmett and Paisley. He is also survived by his sister-in-laws, Enola Surrell and Barbara Cutts of NH, nephew, Jeffrey Surrell Sr. of NH, and many cousins, nieces and nephews along with great-grand nieces and nephews. Although Chuck was an only child, he leaves his "partner-in-crime", "brother" and very special friend, Dave Spear of Columbia, CT. He will be always missed, loved and forever in our hearts. A special thanks to Dr. Michael Bey of Rockville, CT and the Tolland Fire Department for their many, many "uber" rides through the years. Thanks to Rockville General Hospital - Nurses, ICU, ER and hospice, Woodlake and their staff, where he was on a first name basis with all. A graveside service will be held at 11:00am on Tuesday July 11, 2017 at the Toledo Memorial Park Cemetery. Family requests memorial donations be made to the Tolland Fire Department, 191 Merrow Road, Tolland, CT 06084. Arrangements have been entrusted to the Ansberg-West Funeral Directors, 419-472-7633. To send his family online condolences, please visit www.ansberg-west.com.

Clarence (Chuck) L. Schultz, 77 of Tolland, CT passed away on Saturday, June 10, 2017, peacefully with his family at his side. He was born in Toledo, OH on July 21, 1939. He graduated from Devilbiss High School and joined the U.S. Navy serving... View Obituary & Service Information

The family of Clarence L. "Chuck Schultz created this Life Tributes page to make it easy to share your memories.