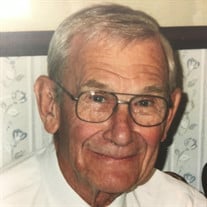 Claude J. Liebrecht, age 95 passed away Sunday, September 9, 2018, at Sunset Village in Sylvania, surrounded by his loving family. He was a beloved husband of nearly 70 yrs to Mary Ann, and together they lovingly raised their three children, Claudia, Patty and Dan. Claude was born Oct 26, 1922, the son of William J. and Catherine (Knapp) Liebrecht in Ottoville Ohio. After moving to Cleveland in 1941, he volunteered for the military and proudly served in the Army, as a member of the 99th Division, who bravely fought in the Battle of the Bulge, was the first division to cross the Rhine River into Germany at Remagen, and helped liberate sub camps at Dachau. Returning home, Claude met the love of his life Mary Ann at a festival in Ft. Jennings Ohio; and began a nearly 70 year love story, of a committed couple, the best kind of partners, who were always there for each other, in good and hard times. Claude began his career in barbering in Toledo that spanned over 47 years, starting in the Old West End, and then over 40 years at the Friendly Service Barber Shop at Lewis and Eleanor. Claude took pride in his work, often cutting the hair of several generations of a family, and in the caring friendships he had with so many of those customers. From singing in the choir at St. Clement to often visiting and cutting the hair of customers who were sick or hospitalized, Claude's life was filled with a sense of service to others. A lifelong Cincinnati Reds fan, Claude again turned towards helping others, by rustling up all the kids in the neighborhood to meet at the ball field to learn how to play baseball. Claude was preceded in his death by his parents, as well as his brother Paul, and his grandson Steven Skinner. He is survived by his wife Mary Ann, three children, Claudia (Jeff) Beutler, Patty (Patrick) Skinner and Dan (Jennifer) Liebrecht, ten grandchildren, Kristen, Kelly, Joseph, Meghan, Jack, Kathryn, Joseph, David, Christine and Matthew, thirteen great grandchildren, his brother Jerome (Anne) Liebrecht and many nieces, nephews, grandnieces and grandnephews. Claude was a man of faith, who loved the Lord, and lived his life with a deep sense of gratitude. The family is truly grateful for the wonderful care Dad received from all the staff at Sunset Village Sylvania as well as Ashanti Hospice. Visitation will be held at Ansberg-West Funeral Home, 3000 West Sylvania Ave, Toledo, on Friday, September 14, 2018 from 3:00PM to 8:00PM PM , where the Rosary will be recited at 7:00 PM. Mass of the Resurrection will be celebrated at St. Clement Catholic Church at 10:00AM on Saturday, September 15, 2018. Interment will follow at Ottawa Hills Memorial Park. Those wishing to make memorial contributions are asked to consider St. Clement Catholic Church.

Claude J. Liebrecht, age 95 passed away Sunday, September 9, 2018, at Sunset Village in Sylvania, surrounded by his loving family. He was a beloved husband of nearly 70 yrs to Mary Ann, and together they lovingly raised their three children,... View Obituary & Service Information

The family of Claude J. Liebrecht created this Life Tributes page to make it easy to share your memories.