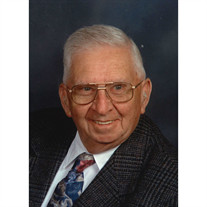 On Sunday, November 12, 2017 in the loving presence of his family and his caring and compassionate new family at Hospice of Northwest Ohio on Detroit Avenue, Clinton Ralph Longenecker, Jr., left our earthly world for his heavenly home. He was born on December 1, 1923 on Mott Avenue in Toledo to Margie Peppers Longenecker and Clinton Ralph Longenecker, Sr. After attending Garfield Grade School he graduated from Waite High School in 1942. At the end of his freshman year at The University of Toledo Clint was inducted into the United States Army and landed on Omaha Beach on D-day with his brothers of the 81st Chemical Mortar Battalion of the First Infantry Division. He received five battle stars while serving in the European Theatre from June 6, 1944 until May 8, 1945. After the war Clint returned to Toledo where he became a partner in his father’s company, creating Longenecker and Son Flooring on Front Street. On October 30, 1948 Clint married Rita Marie Pecord after a courtship filled with dancing, fun and friendship. Clint retired from his family business in 1978 but continued to serve the business community working at Junior Achievement and H&R Block. He was an active community leader serving as an officer of the East Toledo Club for 50-years and Treasurer and Secretary of the East Toledo Bowling League for 40-years. Clint met annually for over 50-years with his brothers from the 81st Chemical Mortar Battalion. And in 1994 returned to Normandy for the 50th Anniversary of D-Day. Clint was a proud member of the Conn-Weissenberger American Legion Post. . Clint and his wife Rita were avid travelers for over 60 years, including camping with their children, travelling to all 50-states and touring extensively in Europe. Clint was a lifelong volunteer working with St. Vincent’s Medical Center, Lourdes University, The American Red Cross, Blessed Sacrament Seniors Group and serving as a Boy Scout Troop Master at Blessed Sacrament Church. He loved working with kids including sharing WWII history with high school students at Whitmer High School and reading to nursery school children. Clint is survived by his wife of 69-years Rita Longenecker and his four children Marsha (Warren) Hunt, Dr. Clint (Cindy) Longenecker, Dr. Paul (Susan) Longenecker, and Rick (Debbie) Longenecker. As well as ten grandchildren Neil, Ellen, Clint, Shannon, Stephen, Chris, Laura, Adam, Kayla and Jack; two step grandchildren Jeff and Jennifer; as well as two great grandchildren Katelynn and Christopher. The family will receive guests on Wednesday, November 15, 2017 from 2:00 to 8:00 p.m. at Ansberg West Funeral Home on Sylvania Avenue. At 7:00 p.m. members of the Conn Weissenberger Post will conduct a military memorial service. A mass will be held at Corpus Christi Catholic Church on Dorr Street at 10:30 a.m.. The family will be receiving guests from 9:30 until the mass begins. Burial will follow the mass at Toledo Memorial Park on Monroe Street in Sylvania. In lieu of flowers the family asks that donations be made to either Blessed Sacrament Catholic Church or Hospice of Northwest Ohio.

On Sunday, November 12, 2017 in the loving presence of his family and his caring and compassionate new family at Hospice of Northwest Ohio on Detroit Avenue, Clinton Ralph Longenecker, Jr., left our earthly world for his heavenly home. He was... View Obituary & Service Information

The family of Clinton Ralph Longenecker created this Life Tributes page to make it easy to share your memories.