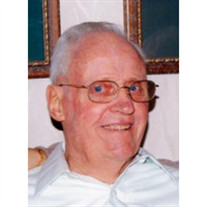 Dallas E. "Tex" Crider, Jr., 82, passed away Tuesday, November 18, 2008 at St. Luke's Hospital surrounded by his family.? He was born in Lima, OH to Reverend Dallas E. Crider, Sr., and Gladys (Davisson) Crider who preceded him in death. Also preceding him was his grandson Joey Petersen.? Upon graduation from Southview High School in 1944 he enlisted in the Navy and served as a Seaman 1st Class aboard the USS Shelton in WW II earning an honorable discharge in 1947.? He then met the love of his life Lou Sonchek with whom enjoyed 58 memorable years of marriage.? ? ? He was a TV technician and sales representative for many years at the former Cliff Clark's and McGranahan's.? In later years he was employed at Hoover & Wells. ? In his younger years he enjoyed bowling, fishing photography and traveling.? Tex was over a 50 year member of ORYC and became an avid ham radio operator (N8FPH) as well as a member of T.R.A.C. ? His "BRIDE" and his daughters were his entire world!? His whistle, his smile, his laughter and his love of live and family will never be forgotten.? He was known as a "jack of all trades" who was always willing to help anyone in need.? ? ? Tex is survived by his devoted wife, Lou; daughters, Deb (Scot) Romano, Kathy (Ed) Peterson; sister, Darlene (Duke) Duricek; grandchildren, Stacey, Alysia, Dawn and Amy; great grandchildren, Tupou, Tristen and Mele: aunts, uncles, nieces and nephews. ? Services will be 11 AM Monday, November 24, 2008 at the Ansberg-West Funeral Home, 3000 Sylvania Avenue where the family will receive friends from 2-8 PM Sunday, November 23, 2008. ?Interment Ottawa Hills Memorial Park. ? Any tributes to Tex may be made in the form of contributions to the Ability Center of Greater Toledo or the charity of the donor's choice. ? ??? ?

The family of Dallas E. Crider created this Life Tributes page to make it easy to share your memories.