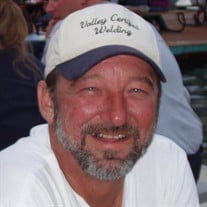 Daniel T. Hayes, 60, of Toledo, passed away Tuesday, May 07, 2019, at his home, surrounded by his loving family. Dan fought hard the past nine months and is now at peace. Dan married Robin Dearing on June 7, 2003, who will sorely miss her best friend and husband. Dan was employed with Valley Certified Welding (VCW) for the past 20 years, starting off as a pipe welder/fitter and the past 10 years worked as a field supervisor, overseeing the projects. He took a lot of pride in working for his brother, John, and helping John’s company grow. He traveled the country doing what he loved. Along with spending time with his large family and many great friends Dan also loved his dogs, Zeba and Piper, fishing, camping and was an avid fan of The University of Michigan football, The Detroit Lions and The Detroit Tigers. You could always depend on Dan wearing any of his favorite team’s clothing and hats! Left to cherish his memory is his wife; daughter, Amanda (Mikie Veres ) Hayes; stepdaughter, Linda (Brett) Bolton and stepson, Dustin Koch; grandchildren, Donovan and Jaidon Abdo and Breanna and Leland Bolton; his father, Robert (Yvonne) Hayes; his siblings, Connie (Terry Harney) Hayes, Kit (Jim) Bernath- Jenkins, John (Shannon Russell) Hayes, Holly (Kevin) Merritt and Lisa (Jim) Balcerzak. Also surviving are his siblings in-law, Kim (Buddy) Yarnell, Tom (Windy) Dearing, Randy (Marlene) Dearing, and Chuck (Tosha) Ulch; numerous nieces, nephews and a host of other relatives. Dan is preceded in death by his daughter, Maggie; his mother, Nancy Hayes; his niece, Annalisa Hayes; brother-in-law, Eric Bernath and his four legged buddy, Piston. We find great comfort knowing how happy they all were to see Dan come home! Family and friends are invited to visit on Thursday from 1-8 p.m., at the Ansberg-West Funeral Home, 3000 Sylvania Avenue, (between Secor and Douglas Road). Funeral services will be held on Friday at 11:30 a.m., at Lutheran Church of Our Saviour, 2820 West Alexis Road. Interment will follow at Toledo Memorial Park.

Daniel T. Hayes, 60, of Toledo, passed away Tuesday, May 07, 2019, at his home, surrounded by his loving family. Dan fought hard the past nine months and is now at peace. Dan married Robin Dearing on June 7, 2003, who will sorely miss her best... View Obituary & Service Information

The family of Daniel T. Hayes created this Life Tributes page to make it easy to share your memories.