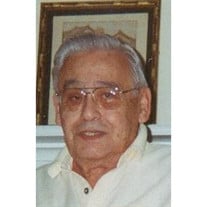 On Valentine’s Day, February 14, 2017, Daniel L. Zydel departed this life and rejoined the love of his life Deloris. He had been in Connecticut visiting his sister and nieces when he became ill. Danny was born February 19, 1925 and grew up in the “Lagringka” neighborhood in North Toledo. He attended Parkland Elementary School and was a graduate of Woodward High School. Over the years Danny had many careers. He was a butcher in the neighborhood grocery store, a production worker for Autolite, a Deputy Sherriff, and a maintenance supervisor for the Toledo Board of Education. It was during his time as a Deputy Sherriff that he met his wife Deloris. They were married on June 17, 1961 and together raised two sons. Danny loved spending time with his family and friends and always was ready to share a joke. For many years, he and Deloris hosted family gathering and holidays. Danny was very proud of his Polish heritage and at Christmas always included traditional Polish foods. On Sunday mornings, he faithfully listened to “The Polka Party” with Helen and Chet. After their retirement in the 1980s, Danny and Deloris traveled to many destinations and enjoyed seeing sights across the country. They enjoyed time with their grandchildren, church friends and activities, and bus trips to the casino. Danny is survived by his sister, Virginia Vivaldi; sister-in-law Phyllis Buchanan; step-sons Harry (Karen) Price, Foster (Jan) Price; special nieces and nephew Lucy Schuman, Kathleen Poynter, Donna Scott, Becky Buchanan, Joseph (Lori) Zydel; 5 grandchildren, and numerous great-grandchildren. He was preceded in death by his wife Deloris, and brothers, John, Billy, and Michael and grandson Mark Price. Friends are invited to visit from 2:00-8:00pm on Tuesday February 21, 2017 in the Ansberg-West Funeral Home, 3000 W. Sylvania Ave. Visitation will also begin on Wednesday at 10:00am at Aldersgate United Methodist Church, 4030 Douglas Rd. where funeral services will begin at 11:00am. Rev. Lilanthi Ward Officiant. Burial will follow in Ottawa Hills Memorial Park. Those wishing to make memorial contributions are asked to consider Aldersgate United Methodist Church, or the Alzheimer’s Foundation. To send his family online condolences, please visit www.ansberg-west.com

On Valentine&#8217;s Day, February 14, 2017, Daniel L. Zydel departed this life and rejoined the love of his life Deloris. He had been in Connecticut visiting his sister and nieces when he became ill. Danny was born February 19, 1925 and grew... View Obituary & Service Information

The family of Daniel L. Zydel created this Life Tributes page to make it easy to share your memories.