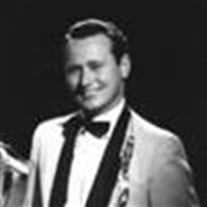 David John Wisniewski, aka Dave Jordan, 84, of Toledo, joined the great horn section in the heavens on April 1, Easter Sunday Morning, after a swift battle with cancer. He was born July 25, 1933 to John and Lucile (Koreki) Wisniewski and was raised with serious attention to musical instruction along with his sister Phyllis and brother Alvin (deceased). He graduated from Woodward High School in 1951 where he and his brother started their own musical radio program. In 1952, at just 19, he landed the coveted position of first horn in the Jonny Long Orchestra in New York City Times Square. The death of his father brought him back to Toledo to stand by his mother and soon to discover and make his wife, local model and 'Miss Toledo', Carol Ann Shrader (deceased). He remained loyal to his musical career, playing saxophone, clarinet, flute, piano, and accordion in his group, The Dave Jordan Band along with the most notable musicians in the area. He would give sax lessons on off-nights and then began a second career as a HVAC Engineer for Wadsworth & Associates until his retirement. Though he had retired from gigging and playing his sax, he stayed the piano and accordion until the end. His pleasures were to tend his garden, tweak his swimming pool, camping, long walks at Wildwood with his dog Ketch, and reading in the sun accompanied by a frosty brew. He will always be remembered by his family and friends for his insane sense of humor and infectious laughter. He is survived by his sister, Phyllis Moore; son, David (Sally) Wisniewski; and daughter, Kathy (Don) Dominique. He is also survived by four grandchildren; and four great-grandchildren; and his fiancée, Mary. A graveside service will be held April 13 at the Woodlawn Cemetery, 1502 West Central Ave. at 1 p.m., followed by a memorial gathering at the Local 14 UAW Hall at 2 p.m., on Jackman Rd. In lieu of flowers, please make a donation the Toledo Humane Society in his name.

David John Wisniewski, aka Dave Jordan, 84, of Toledo, joined the great horn section in the heavens on April 1, Easter Sunday Morning, after a swift battle with cancer. He was born July 25, 1933 to John and Lucile (Koreki) Wisniewski and was... View Obituary & Service Information

The family of David John Wisniewski created this Life Tributes page to make it easy to share your memories.