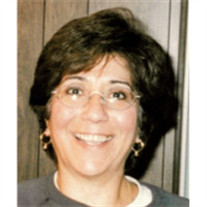 Demetra K. Petros, age 63, passed away peacefully on Tuesday, October 8, 2013 at Ebeid Hospice Residence of complications associated with Sjogren's syndrome and other autoimmune disorders. She was born on August 16, 1950, to Konstantine Gus and Georgia Petros. Demetra attended McKinley Elementary school and was a 1968 graduate of DeVilbiss High School. In 1973, she earned her Social Work degree from the University of Toledo. Demetra was an avid reader as well as a world traveler. She enjoyed traveling throughout the USA, Asia, Caribbean, Europe and especially Greece. Demetra began her Social Worker career as an In-take case worker for the Lucas County Welfare Department. She transitioned to the State of Ohio as a Hearings Officer in 1983 and then worked in the Child Support Division. She later returned to the State Hearings Division and retired after 33 years of service. She was a member of Holy Trinity Greek Orthodox Cathedral, a Daughter of Penelope serving as the Treasurer, and Young at Heart serving as the Secretary for 4 years. She is survived by her mother Georgia, sisters, Kathy (Dennis) Lawrence, Evangeline Biggs, Faye (Nino) Miracola, Christina Bertok, brothers Konstantine, Jr. and Sam Petros. Demetra was preceded in death by her father, Konstantine Gus Petros and brother in law, Ken Bertok. She adored her 11 nieces and nephews (Brad and Nick Lawrence, Holly, John, Chris and Stephanie Biggs, Anthony and Danielle Miracola, Mike and Nicole Petros, and Alec Bertok), as well as the 8 great nieces and nephews. She was their loving and wonderful “Aunt Dee”. Family was her first priority and she was always helping in some way. Demetra enjoyed life with her family and many wonderful lifelong friends. Visitation will be at Ansberg West Funeral Home 3000 Sylvania Avenue, Toledo, Ohio 43613 from 2-8 p.m., Friday, October 11, 2013, with a Trisagion Service at 7:00 PM. Funeral services will be held at Holy Trinity Greek Orthodox Cathedral, 740 North Superior Street, Toledo, Ohio 43604 on Saturday, October 12, 2013, at 11:00 a.m. In lieu of flowers, the family requests memorial contributions be made in Demetra's name to Holy Trinity Greek Orthodox Cathedral, 740 N. Superior St., Toledo, OH 43604.

Demetra K. Petros, age 63, passed away peacefully on Tuesday, October 8, 2013 at Ebeid Hospice Residence of complications associated with Sjogren's syndrome and other autoimmune disorders. She was born on August 16, 1950, to Konstantine Gus... View Obituary & Service Information

The family of Demetra K Petros created this Life Tributes page to make it easy to share your memories.