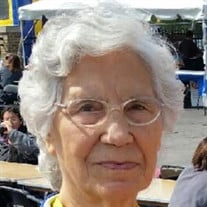 Demetra Theodorou, 84, of Toledo, OH, passed away peacefully on January 22, 2019 at Ebeid Hospice in Sylvania, Ohio. She was born in 1934, in Alea, Greece, to Peter and Anna Petros. Demetra was married to Spiros Theodorou in 1953, and in 1969, they left Alea with their 5 children, and one suitcase, to settle in Toledo, Ohio. Five years later, their family was complete with their arrival of their sixth child. Demetra worked from 1971 until retirement for the Mercy Hospital System as part of the Environmental Services Staff. This is where she learned to speak English, and was introduced to her new community. She was a faithful parishioner of Holy Trinity Greek Orthodox Cathedral from the day that she arrived in the Toledo area. She gave selflessly in service to the church and was a member of the Philoptochos Society, Daughters of Penelope, and Young at Heart. She enjoyed baking in preparation for the annual Greek-American Festival. She especially enjoyed watching her grandchildren and great grandchildren dancing every year at the festival. Her cooking will be missed! Everyone had a favorite meal that she would prepare. Whether you loved her pasta, bread, or her tiganopsomo (Greek Pizza), she welcomed everyone to her table. She is preceded in death by her husband, Spiros, her son, Christos, and her son-in-law, Theodore Elias. She is survived by her daughter, Kalliroi, daughter-in-law, Patricia Theodorou, son, George (Dimitra), son, Peter (Elizabeth), daughter, Elaine, daughter, Anna, Grandchildren, Demetra (Mayco), Nikki (Mathieu), Zachary, January (Randy), Spiros (Jaime), Simone, Logan, Blake, Nikko, Dayna, Stefanie, and her 9 great-grandchildren, Lea, Marcus, Alex, Agathe, Jackson, Amalia, Zoe, Teddy, and Annabella. Demetra is survived by her sisters, Evangelia Mihos, Sophia Spillson, Sotiria Sarantos, Elle (Thomas) Demas, and brother Andy (Maria) Petros. Friends and Family are invited to visit on Friday, January 25, 2109 from 4:00pm to 8:00pm at the Ansberg West Funeral Home, 3000 W. Sylvania Ave. Trisagion Prayers beginning at 7 PM. Funeral Services will be held at Holy Trinity Greek Orthodox Cathedral, 1:00pm on Saturday, January 26, 2019 with Reverend Father Larry Legakis Officiating. Memorial contributions and donations can be made in Demetra’s Memory to Holy Trinity Greek Orthodox Cathedral.

Demetra Theodorou, 84, of Toledo, OH, passed away peacefully on January 22, 2019 at Ebeid Hospice in Sylvania, Ohio. She was born in 1934, in Alea, Greece, to Peter and Anna Petros. Demetra was married to Spiros Theodorou in 1953, and in 1969,... View Obituary & Service Information

The family of Demetra Theodorou created this Life Tributes page to make it easy to share your memories.