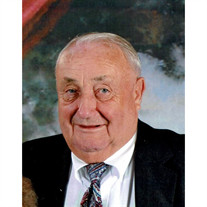 Diedrich “Dick” Garbers, age 80, passed away at home on March 8, 2017. He was born on July 4, 1936 in Schneverdingen, Germany. He played soccer and earned his Journeyman as a Master Bricklayer. In 1954 at age 17, he immigrated to America and became a US citizen in 1960. He worked 40 yrs for Okos Bricklayering Co and was a 61 yr member of Local #3 Bricklayers Union. He met the love of his life, Martha Helber, in July 1955 and they were married on May 4, 1956. Together they raised 5 children. They also hosted two exchange students, Akemi Matsushita from Tokyo and Cordula Florian from Berlin. Proud of his German heritage, he was involved in several German clubs: GAF, GBU, Bavarian Sports Club (BSC), and Toledo Swiss. He was honored to serve as the 19 & 20th Chairman of the GAF. He was festival clean-up chairman and volunteered for the GAF set-up/clean-up for over 30 yrs. He volunteered to help build the main hall and clubhouse at Oak Shade Grove and brickwork at the BSC. He served as Marshall and helped with many functions for GBU District 510. He was proud that all his children and 4 grandchildren Schuhplattlered for the BSC. He enjoyed Gaufests with the Schuhplattler group and was a member of the BSC Stammtisch. After retirement in 1994, Dick and Martha managed the GAF Clubhouse for 10 yrs. As a 61 yr member of Hampton Park Christian Church, he served as an Usher, Deacon and Superintendent of Sunday School and also bowled and played softball on church leagues. He enjoyed watching hockey, soccer, football, baseball, Indy 500 and NASCAR—esp Detroit Lions, Tigers, & Red Wings and OSU. He also loved going to casinos. Dick and Martha loved to travel to Germany to visit family and took over 20 cruises. He was proceeded in death by his parents, Otto and Minna Garbers; sister, Irmgard (Karl) Wolf; brothers, Otto (Irmkin) Garbers, Wilhelm Garbers and great-granddaughter, Cassie Mae. Left to cherish his memory are his loving wife of 60 yrs Martha; children: Linda (Jim) Rice, Diane (John) Miller, Cheryl (John) Peters, Diedrich (Diane) Garbers Jr., and Susan (Chris) Heidenescher; grandchildren: Jimmy (Amber) Rice, Kelly Rice, Daniel (Lori) Staifer, Derek (Chrissy) Staifer, Desiree (Mike) Staifer Treadway, Justin and Chad Peters, Joe and Alan Heidenescher; great-grandchildren: Tori Skorich, Will, Evan, Ian and Norah Staifer; nephews in Schneverdingen, Harald (Uschi) Garbers and Manfred Wolf.

The family of Diedrich Garbers created this Life Tributes page to make it easy to share your memories.

Diedrich “Dick” Garbers, age 80, passed away at home on March...