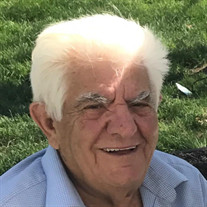 Dimitrios “Jim” Mitsopoulos, age 84, died peacefully at home surrounded by his family on Wednesday, November 25, 2020. He was born in the Village of Gonoussa in Greece on January 3, 1936, to Antonios and Efthymia Mitsopoulos. He spent his childhood in Greece with his four siblings and served honorably in the Greek Army. After his service he immigrated to Toronto where he met and married Athena Vergos. In 1972, he moved his family to Sylvania, Ohio and shortly after he opened Jim’s Pizza Paddle. For over 30 years he prided himself on serving the best homemade greek cuisine. He is known for his homemade grape leaves, gyros, pizza and greek salads. In 2004 he opened and operated Dimitri’s in Sylvania until his retirement in 2008. Besides cooking, Jim had a passion for gardening and has been featured in several articles in the Toledo Blade, showcasing his crop. He also enjoyed hunting with his close friends and spending time with his children and grandchildren. He loved being a Pappou and doted on all his grandkids. Although he lived in this country for so many years, he never forgot the place where he took his first steps. He always spoke with nostalgia for his village Gonoussa in Greece and always dreamed of the next time he would travel to find his favorite places, his paternal home, and friends from the past. He was happy to see his family grow and was always the constant factor that the others around him relied on in every difficulty. The simplicity of his character, his straightforwardness and his kindness were the characteristics of a very likeable man who many were lucky to have known. He is survived by his loving wife, Athena Mitsopoulos; his children Rebecca, Efthymia and Tony (Catherine); grandchildren, Dimitrios, Athena, Theodora, Elias, Alexander, and Gus. Forever in our hearts, we love and miss you. The family will receive friends at Holy Trinity Greek Orthodox Cathedral, 740 N. Superior Street, Toledo, Ohio 43604 on Friday, December 11, 2020 from 9 a.m. until the funeral service at 11 a.m. Masks and social distancing guidelines will be observed at the church. Interment will follow at Toledo Memorial Park.

Dimitrios &#8220;Jim&#8221; Mitsopoulos, age 84, died peacefully at home surrounded by his family on Wednesday, November 25, 2020. He was born in the Village of Gonoussa in Greece on January 3, 1936, to Antonios and Efthymia Mitsopoulos. He... View Obituary & Service Information

The family of Dimitrios "Jim" Mitsopoulos created this Life Tributes page to make it easy to share your memories.