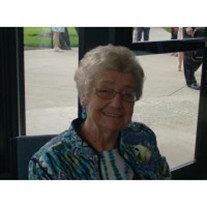 Dolores Jean (Erd) Pollauf, 82, of West Toledo entered into eternal rest surrounded by her loving family at the Hospice of Northwest Ohio in Toledo on Monday, January 16, 2012. Dolores was born in Toledo on July 17, 1929, to Adolph and Theresa (LaFave) Erd. Dolores was married 55 years to James C. Pollauf, Sr., who preceded her in death on September 2, 2006. A 1947 graduate of Central Catholic High School, a 50-year member of the former St. Agnes Catholic Church where she served various roles including president of the Rosary Altar Sodality where she starred in many variety shows, was the first Director of the RCIA Program, a CCD teacher, and CHRP member. She worked for the Bell Telephone Co., Libbey Glass, and 10 years for the Diocese of Toledo at the West Toledo Religious Education Center retiring in 1992. Dolores belonged to a Bunco Club for 67 years, a member of the Kay-C-ettes, Gerardians, Ohio Child Conservation League and the Salesian Club, a volunteer for Heartbeat of Toledo, where she served as vice-president and was a charter member for the Frog Town Scribes of Toledo. She even had a story published in the Blade. She enjoyed camping with her Starcraft Camping Club. She traveled to 49 states including Alaska and Hawaii, as well as the Caribbean and Ireland. She will always be remembered as a friendly, giving, strong leader, hard worker, faithful volunteer, and especially as a devoted mother who raised 10 loving children and lived her life with a deep and abiding faith in God. She truly was a servant of God. Some things she enjoyed were sewing, story writing, scouts, western square dancing and bowling. Dolores was also preceded in death by her granddaughter, Jamie Jagodzinski; parents, Adolph and Theresa Erd; and younger brother Donald Erd. Left to cherish her memory are her 10 children: Sharon (James) Paige, Putnamville, VT; Robert (Mary Cress); James (JP) Jr. (Freda); Kathleen (Douglas) Ciralsky; Colleen (Ronald) Anaszewicz; Mary Ann (Leonard) Detamore, China Twp., MI; Theresa (Philip) Macey; Amy (Jay) Jagodzinski; Patrick (Marjorie), Grand Rapids, OH; Michelle (Rick Rickman) Pollauf; 21 grandchildren; 16 great-grandchildren and 1 great-great-granddaughter; sisters, Joanne (Ron) Boshaw, N. Fort Myers, FL; and Pat (Ed) Holden, Jamestown, TX; plus many nieces and nephews. Family and Friends may visit Thursday, January 19, 2012, from 2-8 pm in the Ansberg West Funeral Home, 3000 W. Sylvania Ave., Toledo, OH, 419-472-7633 where the Rosary will be recited at 7:00 p.m. Prayers will begin at 9:00 a.m. Friday in the funeral home and continue with a Mass of Christian Burial at St. Catherine of Siena Church at 10:00 a.m. with entombment in the Mausoleum at Resurrection Cemetery on Hill and Holland-Sylvania Roads. Memorials may be made in the form of contributions to Hospice of Northwest Ohio, 30000 E. River Rd., Perrysburg, OH 43551, or St. Catherine of Siena Church, 4544 N. Haven Ave., Toledo, OH 43612. The family would like to thank Hospice of Northwest Ohio in Toledo for their care and concern during Dolores' final days. Dolores, you have left us with so many fond memories of all the great times we had with you. We will never forget your beautiful smile and the love you had for each one of us. Rest in peace now. Until we meet again, you will always be in our hearts.

Dolores Jean (Erd) Pollauf, 82, of West Toledo entered into eternal rest surrounded by her loving family at the Hospice of Northwest Ohio in Toledo on Monday, January 16, 2012. Dolores was born in Toledo on July 17, 1929, to Adolph and Theresa... View Obituary & Service Information

The family of Dolores Jean Pollauf created this Life Tributes page to make it easy to share your memories.