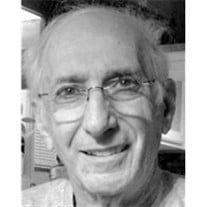 Dominic R. Napoli found peace on 11/29/13 from his short battle with cancer. Dom lived his last month's enjoying his family and friends. He absolutely loved life, his kids, grandchildren, nieces and nephews. He loved going to estate sales and bargain hunting and chatting with everyone he knew...and that's just scratching the surface about who he was. A talented carpenter and everyone's “go to” guy he will be greatly missed by many. He always put the needs of others before his own and would provide help at the drop of a hat. Dom loved taking thousands of photographs of his family and friends documenting many memories we are grateful to now have. He was a masterful storyteller and enjoyed telling stories about growing up and working in Brooklyn, NY. His beloved wife of nearly 50 years, Margaret, preceded him in death after her seven-year battle with cancer during which Dom lovingly cared for her. Dominic “hit the lottery,” when he met his dear friend and kindred spirit, Judy Becker. They enjoyed each day they spent together, you would have thought that they were friends for many years. He made friends quickly and easily and will be missed by many in Toledo and Brooklyn for his warm and welcoming nature. Although a New York sports fan for many years, he quickly adopted the Toledo Mud Hens and Toledo Walleye and loved going to games. Dom was a proud United States Coast Guard Veteran who became a “True and Trusty Brine Encrusted BLUENOSE” on 06-24-54 by crossing the Arctic Circle aboard the U.S. Coast Guard ice cutter, Westwind. Dominic is survived by his daughter Ann Marie and her partner Darlene, his son Joseph and his wife Annette, his grandchildren Marisa, Daniel, Michael, Gina, Ava, and his amazing dog, and companion Mitzy. "Whoever you hold in the heart of you is forever and always a part of you." We will keep Dom alive in our hearts and in our souls. Mass services and burial will take place in Brooklyn, NY on December 28th. A “celebration” of Dom's life will take place in Toledo in the Birdcage at Fifth Third Field on January 11th from 11 a.m. to 2:00 p.m. In lieu of flowers, Dom would have appreciated a donation to youth programs like the Great Lakes Collaborative for Autism in Toledo, Helping Hens or Walleye Wishing Well. Please indicate that your donation is in memory of Dominic Napoli.

Dominic R. Napoli found peace on 11/29/13 from his short battle with cancer. Dom lived his last month's enjoying his family and friends. He absolutely loved life, his kids, grandchildren, nieces and nephews. He loved going to estate sales and... View Obituary & Service Information

The family of Dominic Napoli created this Life Tributes page to make it easy to share your memories.