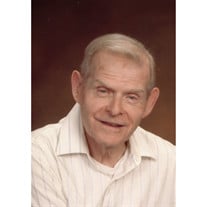 Donald Ray Mattox, 82, of Toledo, went to be with the Lord on Saturday, September 30, 2017. Don graduated from Macomber High School in 1953, then joined the Army and trained on tanks, until getting chosen to be in the Third Armored Division Army Chorus. As part of the Chorus, he toured throughout East and West Germany giving concerts. Upon coming home, Don sang locally as a soloist, and in various church quartets and choirs. He was a song director at Dorr Street Church of God for many years. He married Phyllis Bunner in 1961. They celebrated 56 years of marriage on September 9, 2017. He was a Jewel Tea man, an accountant, and worked at Hans Hansen, in his younger years. He worked as a Lead Security Officer for the latter part of his life. Don was a gentle giant who infused good morals and values into everyone close to him. He always had a song in his heart and a whistle on his lips. He put a smile on people's faces with his quick wit. Don is survived by his wife, Phyllis; daughter, Sharron Pappas (Scott Clapsaddle); grandkids, Cindy Rhodes, and Stephanie (Luc) Matard; great grandkids, Alora, Delia, PJ, and Sophia; 3 step-grandkids and 5 step-great-grandkids. You can celebrate Don's life by attending the visitation at the Ansberg-West Funeral Home, 3000 Sylvania Avenue, (between Secor and Douglas Roads), on Friday, October 6, 2017, from 12:00 noon until the funeral service at 2 p.m. Interment will follow at Ottawa Hills Memorial Park, where a Veteran’s service will be conducted by the Lambertville VFW. Memorial contributions may be made to the Alzheimer’s Association, 2500 N. Reynolds Road, Toledo, OH 43615 or Heartland Hospice, 28555 Starbright Blvd., Suite E, Perrysburg, OH 43551. Online condolences may be sent to the family at www.ansberg-west.com

Donald Ray Mattox, 82, of Toledo, went to be with the Lord on Saturday, September 30, 2017. Don graduated from Macomber High School in 1953, then joined the Army and trained on tanks, until getting chosen to be in the Third Armored Division... View Obituary & Service Information

The family of Donald Ray Mattox created this Life Tributes page to make it easy to share your memories.