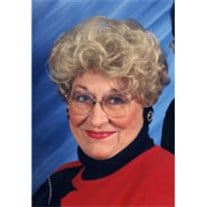 Doramarie “Rusty” (Schuller) Nakad, 81, passed away Tuesday, April 12, 2011 at the Sunset House. She was preceded in death by her parents, Henry and Dorothy Schuller and sister, Louaine Martin. She had been a Senior Executive Secretary with the Dana Corp. over a period of 20 years. She was active in volunteer services, having taught nutrition at senior centers, worked at the Kitchen for the Poor and provided various shelters for hungry veteran families where she became affectionately known as the “Muffin Lady”. She was a volunteer probation officer in Common Pleas Court, Lucas County Adult Probation and was especially active in the American Legion Auxiliary of Conn-Weissenberger Post serving as Chairman of Veterans Affairs and Rehabilitation for 8 years. In 1991 she was named Unit Woman of the Year and in 1992 was Auxiliary Woman of the year and represented the state of Ohio where she traveled to Phoenix and had the joy of meeting Erma Bombeck, that year's National Woman of the Year. She was a '92 Girl's State “Mom” and a 50 year member of Bible Students International. She had been a long time Sunday School teacher and soloist in several of the city's larger churches. She was named Lucas County Democratic Party volunteer of the year in 1996. Surviving is her husband of 40 years, Herbert; children, Randy (Charlene) Oates and Cindi Oates; grandchildren, William, Jeremy, (Monica) and Justin Oates; 3 great grandchildren and niece, Debbie Martin. Services will be 11 AM Tuesday at the Ansberg-West Funeral Home, 3000 Sylvania Avenue where the family will receive friends for 2-5 and 6-8 PM Monday. Interment Lake Twp Cemetery. Any tributes may be made in the form on contributions to Sunset House or Ashanti Hospice. The family wishes to thank the Sunset House and Ashanti Hospice for the wonderful care they provided for Rusty.

Doramarie &#8220;Rusty&#8221; (Schuller) Nakad, 81, passed away Tuesday, April 12, 2011 at the Sunset House. She was preceded in death by her parents, Henry and Dorothy Schuller and sister, Louaine Martin. She had been a Senior Executive Secretary... View Obituary & Service Information

The family of Doramarie Nakad created this Life Tributes page to make it easy to share your memories.