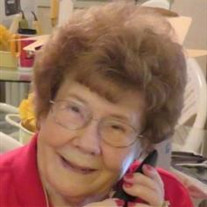 Dorothy Ann Brookover/Unruh, 94, passed away on January 17, 2020, at Hope Hospice in Cape Coral, Florida. Dorothy was born on September 3, 1925 in Toledo, Ohio, to her loving parents, Grace and Leroy Lohner. She graduated from DeVilbiss High School in 1943 and attended Davis Business College. Dorothy was preceded in death by both her parents, Leroy and Grace, her first husband, George Brookover, and her second husband, Edward Unruh. She is survived by her daughter, Karen, and her two sons, David and Jim; grandchildren Jim Brookover (Tricia), Kimberly Seibert (Greg), Brett Brookover; Chet Brookover; and 7 great-grandchildren. Dorothy worked at Owens Illinois in the Tech Center during World War II and later as a real estate agent for Tony Falco Real Estate Company. She returned to work as a payroll supervisor for Holiday Inn of Perrysburg after raising her three children. Dorothy was the president of DeVeaux School’s Mothers Club. She was also the president of the Ohio State University Alumnae Club of Lucas County and was a member of Aldersgate Methodist Church for 56 years, where she served on the church’s Executive Administrative Board. Dorothy was also extremely involved as a member of the Flower Hospital Auxiliary. She enjoyed raising her three children, traveling throughout the world, and participating in several bridge and various other card-game clubs. The family will receive guests on Wednesday, January 22, 2020, between the hours of 12:30 and 1:30 p.m. at the Ansberg-West funeral home, 3000 Sylvania Avenue in Toledo, Ohio (419.472.7633). Funeral services will be held at Ansberg-West on Wednesday, January 22, 2020, immediately following Dorothy’s showing at 1:30 p.m. In lieu of flowers, please make a donation to the Aldersgate United Methodist Church Memorial Fund in Dorothy’s name.

Dorothy Ann Brookover/Unruh, 94, passed away on January 17, 2020, at Hope Hospice in Cape Coral, Florida. Dorothy was born on September 3, 1925 in Toledo, Ohio, to her loving parents, Grace and Leroy Lohner. She graduated from DeVilbiss High... View Obituary & Service Information

The family of Dorothy Ann Brookover/Unruh created this Life Tributes page to make it easy to share your memories.