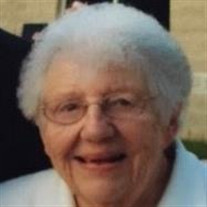 Dorothy R. Miller, 93, of Toledo, loving wife, mother, and grandmother, went to be with the Lord on November 4th, 2018 while in hospice care at her residence in Okemos, Michigan. She was born on May 15, 1925 in Toledo, Ohio to Andrew and Josephine Extine. With her mother dying shortly after her birth, Dorothy was raised by Martin and Agnes Jaworski. She graduated from Libbey High School in 1943, and then worked at several locations in Toledo including Tillotson Carburetors, where she was introduced to Frederick Miller. They were married on September 3, 1949, and shared their lives together for 64 years until Frederick’s death in 2014. As an active volunteer and dedicated mother, Dorothy served in many organizations, including the DeVeaux School PTA, the P.E.O. philanthropic organization, and Aldersgate United Methodist Church, where she was active in the United Methodist Women Association. She coordinated and ran the annual Christmas Bazaar and rummage sale there for many years. After raising three sons, she and Fred regularly visited family and traveled to Europe and across the U.S. from Alaska to the Florida Keys, where they spent many winters. An avid game-player, Dorothy enjoyed bridge and word games with many friends and relatives. Between life as a mother and enjoying friends, relatives, and grandchildren, Dorothy lived a full and blessed life of love, friendship and service to others. She is survived by three sons, Dean (Cathy) of Whidbey Island, WA, Dennis (Daina) of Okemos MI, Gary (Tricia) of Medford NJ, and six grandchildren, Matthew (Suramya), JoAnna (Zoltan), Mara, Anna, Alana, and Jamie. Visitation will be at Ansberg West Funeral Home, 3000 W. Sylvania Ave from 2 to 7 p.m. Friday, Nov 9th. Services will be held on Saturday November 10th at 10:30 a.m. at Aldersgate United Methodist Church followed by internment at Ottawa Hills Memorial Park. Donations in her memory may be made to Aldersgate United Methodist Church. Online condolences may be sent to www.ansberg-west.com.

Dorothy R. Miller, 93, of Toledo, loving wife, mother, and grandmother, went to be with the Lord on November 4th, 2018 while in hospice care at her residence in Okemos, Michigan. She was born on May 15, 1925 in Toledo, Ohio to Andrew and Josephine... View Obituary & Service Information

The family of Dorothy R. Miller created this Life Tributes page to make it easy to share your memories.