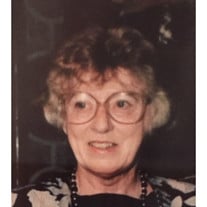 Dr. Ann Lammers Lasek, 90, of Toledo, passed away Tuesday, December 5, 2017. She was born in Norfolk, Nebraska in 1927, and was the eldest child of Paul and Mary Lammers. Ann earned an undergraduate degree at Duchesne College in Omaha, Nebraska and her medical school degree at Creighton University, also in Omaha. After her internship at St. Francis Hospital in Evanston, Illinois, she completed her residency in psychiatry at Ypsilanti State Hospital in Ypsilanti, Michigan and a fellowship at the University of Pittsburgh. She married Dr. Konrad Lasek, settled in Toledo and opened her private medical practice with her husband in the Polish Village of Toledo. When she came to Toledo in the 1960s, Ann was the first female child and adolescent psychiatrist in northwest Ohio. Ann was board certified in both psychiatry and child psychiatry. She was on active staff at Mercy Health - St. Vincent Medical Center and retired from the practice of medicine in 2006. Throughout her life, Ann was concerned with the well-being of children, ultimately being named a Distinguished Life Fellow of the American Psychiatric Association. She was also a member of the American Psychiatric Association, the American Academy of Child and Adolescent Psychiatry, the Ohio Psychiatric Physicians Association and the Toledo Academy of Medicine. Survivors include her daughter, Marja (Kenneth) Lasek-Martin. She was preceded in death by her husband, Dr. Konrad Lasek. Family and friends are invited to visit from 1 to 6 p.m. Sunday in the Ansberg West Funeral Home, 3000 Sylvania Ave. (between Secor and Douglas Roads), where the Rosary will be recited at 5 p.m. Family and friends may also visit on Monday, at Gesu Church, from 10 a.m., until the Mass of the Resurrection at 11 a.m. Father Marty Lukas will officiate. Interment will be private in Resurrection Cemetery. Those planning an expression of sympathy are asked to consider the Alzheimer's Association of Northwest Ohio or the Mercy Health Foundation of Greater Toledo. Online condolences may be sent to the family at www.ansberg-west.com

Dr. Ann Lammers Lasek, 90, of Toledo, passed away Tuesday, December 5, 2017. She was born in Norfolk, Nebraska in 1927, and was the eldest child of Paul and Mary Lammers. Ann earned an undergraduate degree at Duchesne College in Omaha, Nebraska... View Obituary & Service Information

The family of Dr. Ann Lammers Lasek created this Life Tributes page to make it easy to share your memories.