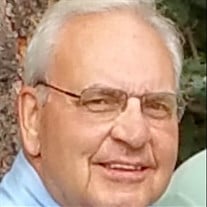 "TO BE RICH IN FRIENDS IS TO BE POOR IN NOTHING". Dr. Leland ‘Nick’ MacDonald passed away in Perrysburg, OH, on June 6, 2018, at 79 years of age. We who love him dearly will miss him every day of our lives. Nick was born to his parents Leland and Mary (Maverkos) MacDonald on September 15, 1938 in Toledo, OH. He became a proud ‘East Sider’ for life when he was brought home to the east side of Toledo by his parents, residing for most of his Childhood on Freedom Street. Nick was baptized at Holy Trinity Greek Orthodox Cathedral in Toledo, OH where he attended Greek School as a child. He and his siblings Kathy (John) Horvath and Pete (Debbie) MacDonald lived a childhood poor in money but rich in Greek and Scottish family members, heritage and deep friendships. Nick attended Waite High School and then went on to attend Hillsdale College in Hillsdale, MI and the University of Toledo in Toledo, OH after returning home to care for his father after a serious accident. Nick was the first person in his family to attend college. Due to his heritage, good looks and athleticism he was often referred to as a ‘Greek God’ by his peers and admirers ~ a compliment he did not mind. Nick joined the United States Army during the Berlin Crisis of 1961. He served in the Army 101st Airborne Division in Fort Knox and Fort Campbell, KY within which he received awards for Marksmanship and then was Honorably Discharged in November 1964. Following discharge from the service, Nick enrolled within The Ohio State University College of Dentistry, graduating in 1967/68. His oldest children, Debbi (Bob) Tucker and Tami (Rick) Krueger were born while living at Buckeye Village at The Ohio State University. This time period is when Nick’s heart began to pump Scarlet and Gray and his lifelong love of Ohio State Football commenced. Nick then, naturally, returned to the East Side of Toledo to open his first practice, eventually purchasing a building on Navarre Avenue where his practice grew to more than 4,000 patients over time. Nick struck gold and married the long-haired Swiss love of his life Susan (Rupli) MacDonald on April 20, 1977 after proposing to her on a skiing trip in Colorado. This was the best decision of his life. Because of this decision, Nick, Debbi and Tami received the lifetime gift of an amazing wife and mother as well as two sons and brothers and fellow passionate outdoorsmen Aaron Daler and Justin (Kristin) Daler. In 1980, Nick and Sue gave birth to the baby ‘glue’ of the family, Sarah (Kyle) Ruha and their beautiful, combined family was complete. During his career, Nick served within various leadership positions on the Board of the Toledo Dental Society. He also established the first Emergency Dental Service in Toledo prior to the existence of these resources at the Medical College of Ohio. For his efforts within the State of Ohio, Nick was nominated for, and received, the Pierre Fauchard Award for his outstanding contributions to Dentistry. Following his retirement in 2006, Dr. MacDonald traveled throughout Ohio voluntarily applying his experience and compassion to helping underserved patients in need of dental care through The Dental Center of Northwest Ohio. Nick/Dad/Daddy/Papou was our ‘go to’ Optimist - a life force unlike any other who enjoyed life to the fullest especially when fly fishing, attending (and rewatching) Ohio State Football games and spending time with his family. There are many times in our life when we call upon pieces of wisdom, strength and humor that we learned from him which have given us the strength to overcome difficulty and strive to be the best versions of ourselves for those around us. We will miss him immeasurably but the gift of family which he and Sue created and nurtured will live on in us forever. Nick is survived by his wife, Susan (Rupli) MacDonald; his children, Debbi (Bob) Tucker, Columbus, OH, Tami (Rick) Krueger, Cincinnati, OH Aaron Daler, Glenwood Springs, CO, Justin (Kristin) Daler Perrysburg, OH and Sarah (Kyle) Ruha, Columbus, OH and his ‘adopted in love’ children Christina (Jason) Park, Gainesville, FL and Chris Brucker, Meadville, PA. Nick was lucky enough to hold six grandchildren in his arms when born, giving them their first Ohio State football – Sophie Krueger, Cassie Daler, Aiden Krueger, Lilli Krueger, Gunnar Daler & Tatum Daler. He is also survived by his sister, Kathy (John) Horvath and Pete (Debbie) MacDonald as well as many, many family and friends who were touched deeply by his natural gift of human connection, compassion and joie de vivre. We invite you to remember and celebrate Nick’s life along with us on Monday, June 11th, at the Ansberg-West Funeral Home, 3000 W. Sylvania Avenue Toledo, OH 43613, (between Secor and Douglas Roads), from 3:00PM – 8:00PM. A Trisagion Service will commence at 7:00PM. Nick’s funeral service will be held on Tuesday, June 12th, at Holy Trinity Greek Orthodox Cathedral, 740 N. Superior Street, Toledo, OH 43604, at 10:30AM, followed by a procession to Toledo Memorial Park, 6382 Monroe Street, Toledo, OH 43560. Donations in Nick’s memory may be made to the Dental Center of Northwest Ohio, 2138 Madison Avenue, Toledo, OH 43604 or Holy Trinity Greek Orthodox Cathedral, 740 N. Superior Street, Toledo, OH 43604.

The family of Dr. Leland "Nick" MacDonald created this Life Tributes page to make it easy to share your memories.

&quot;TO BE RICH IN FRIENDS IS TO BE POOR IN NOTHING&quot;.