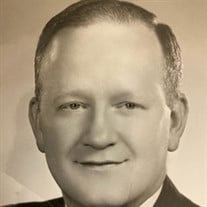 Dr. Thomas L. (Tom) Maloney died peacefully, at his home, on June 12, 2021 – seventeen days after his 100th birthday. He died a happy man, humbled by his own accomplishments, grateful for the blessings of long life and a loving family, and secure in the knowledge that he could still spell Schenectady. Tom’s 100th birthday, May 26, 2021, was occasion for grand celebrations of his life. These included a parade of Veterans and well-wishers through his neighborhood and Proclamations for his achievements. Hundreds came to thank him for his service and congratulate him for his accomplishments. The celebrations were the subject of a front-page article in the Toledo Blade and affectionate coverage by 3 local television stations. Tom was known for his prodigious memory, his generosity and, in later years, his willingness to embrace diversity and new ideas. A lifelong resident of Toledo, he practiced as a podiatrist in this community for 47 years. He was a devout, Irish Catholic and a member of Most Blessed Sacrament Parish for over 70 years. He was a decorated veteran of WWII, serving with the Fifth Marine Division Medical Corps in the Pacific Theater. He was a survivor of the Battle of Iwo Jima where, as a Navy Corpsman, he sought to save lives and provide comfort to the wounded. After the war, he served as a member of the US occupation forces in Japan. While there, he found (to his surprise) an opportunity to help a group of Japanese Catholic Nuns, who were very much in need of his assistance. Tom was the youngest of four children of Dennis and Evelyn (Fitzgerald) Maloney. He attended Central Catholic High School, De Sales College, and the Ohio College of Chiropody. After the completion of his military service, he returned to Toledo to marry the love of his life, Joyce (Corrigan) Maloney. They celebrated 58 years of marriage before her death in December, 2005, and together they reared 9 children: Terri (Marty) Mohler, Carol (Don) Wiczynski, Bill (Mary Beth) Maloney, Tom (Sue) Maloney, Tim (Becky) Maloney, Ann Marie (Dave) Balcerzak, Chris (Jean) Maloney, Marsha (Mike) Lewis and Dan Maloney. He was the proud grandfather of 27 grandchildren and 15 great-grandchildren. Tom and Joyce cherished their siblings and their families. Tom’s sisters, Dorothy Neuhausel, Rosemary Danford, and Margie Maloney, and Joyce’s siblings, Ray Corrigan, Jerry Corrigan, Mickey O’Donnell, and Doris Weiser, all predeceased him. He is survived by many, many nieces and nephews, a large number of whom joined in his centennial celebration. Tom was a talented piano player who, at age 100, could still entertain family and friends with melodies he played from memory. As a hobby (and because he believed the Blessed Virgin keeps track of Hail Mary’s) he handmade thousands of rosaries that he donated to the missions, prisons, and anyone expressing a need or desire for one. He was especially proud of his Notre Dame (blue and gold) and rainbow rosaries. Tom was also known, affectionately, by other names, “TL”, “The Boss”, “Daddy-O”, “Papa”, and “The Great One” among them. On his 95th birthday he announced that he could henceforth be known by yet another name: Mr. Wonderful – not because of anything that he had done but in gratitude for all the wonderful people who had filled his life with so much joy and happiness. Tom had angels in his life. His daughter, Ann Marie Balcerzak, was his buddy, his best friend, his chief caregiver and his inspiration. She is living proof that unconditional love can keep a man alive for 100 years. His daughter-in-law, Jean Maloney, and his daughter, Marsha Lewis, earned their wings as selfless caregivers. Tom’s family wants to give special thanks to the many other friends and caregivers – and especially Louise Wawrzyniak, Dennis McHugh, Mitch Naufel, Dr. Tom McCabe, Dr. Tom McAlear, Christeena Baker, Linda Schings, Babs Wernert, Janet Krueger, Carrie Braden, Samantha Boyle, Heidi Kanary, Holly Buenavista, and Aimee Wise -- who worked so hard to keep Tom happy, sharp – and in his home. The family also wants to thank Father Michael Geiger of Most Blessed Sacrament Parish, who celebrated an outdoor Mass with Tom in honor of his centennial and returned 2 weeks later (on short notice) to administer the Sacrament of the Sick. Mass of the Resurrection will be at 11:00 a.m. on Thursday, June 17, 2021, at Most Blessed Sacrament Church, 2240 Castlewood Dr., Toledo, OH 43613. Visitors will be received at the Church Narthex prior to the Mass from 9:00 am to 11:00 a.m. Cemetery services at Resurrection Cemetery. The family suggests that any tributes be made to Most Blessed Sacrament Church.

Dr. Thomas L. (Tom) Maloney died peacefully, at his home, on June 12, 2021 &#8211; seventeen days after his 100th birthday. He died a happy man, humbled by his own accomplishments, grateful for the blessings of long life and a loving family,... View Obituary & Service Information

The family of Dr. Thomas L. Maloney created this Life Tributes page to make it easy to share your memories.