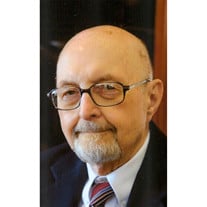 Edwin M. Culkowski, 86, passed away Wednesday, November 22, 2017, at The Waterford at Levis Commons, Perrysburg, OH, surrounded by his loving family. He was born July 15, 1931, in Toledo, and was the son of Edwin and Jane Culkowski. Ed served honorably during the Korean War in the U.S. Army. Ed attended St. Thomas Aquinas Elementary School and was a 1949 graduate of Central Catholic High School. He received his B.S. as a chemical engineer from the University of Notre Dame in 1953, and received a second B.S. from the University of Toledo, in 1991. Ed was a longtime member of St. Pius X Church, the Knights of Columbus and the UUUSA Boys. He was a chemical engineer for Allied Chemical and Plaskon Products, where he retired. Ed then worked as an independent consultant for Rohm & Haas and Farboil Co. He was a loyal Notre Dame fan. Ed spent many wonderful summers, with his family at their cottage in the Irish Hills. He was a voracious reader, and collector and historian of Hummel figurines. Ed enjoyed fishing, skiing, traveling, sports cars, martinis and wine. Survivors include his children, Kathy (Steve) Hamm, Kevin (Nancy) Culkowski, Brian (Julia) Sterkovsky, Jeanne Larnhart and Jerry Culkowski; grandchildren, Amanda, Kiley, Nikki, Brittany, Kelsey, Patrick, Alex, Sean, Garrett, Zach, Madison and Lauren and great-granddaughter, Quinn. Ed was preceded in death by his wife, Nancy Culkowski and brother, James Culkowski. Family and friends are invited to visit on Sunday, from 1-7 p.m., in the Ansberg-West Funeral Home, 3000 Sylvania Avenue, (between Secor and Douglas Roads), where a wake service will be held at 6:30 p.m. Prayers will begin on Monday at 10 a.m., from the funeral home, followed by the funeral mass at 10:30 a.m. at St. Pius X Church, 2950 Ilger Avenue, Toledo, OH 43606. Interment will follow at Calvary Cemetery. Memorials, in Ed’s name, may be made to The Gardner-McMaster Parkinson Center, UT/MCO Health Science Campus, 3000 Arlington Avenue, Ruppert Health Center, Room 1500, Toledo, OH 43614, or The Waterford at Levis Commons Activity Program, 7100 Wilkinson Way. Perrysburg, OH 43551. The family would like to thank the staff at The Waterford for all of their care and kindness. Online condolences may be sent to the family at www.ansberg-west.com

Edwin M. Culkowski, 86, passed away Wednesday, November 22, 2017, at The Waterford at Levis Commons, Perrysburg, OH, surrounded by his loving family. He was born July 15, 1931, in Toledo, and was the son of Edwin and Jane Culkowski. Ed served... View Obituary & Service Information

The family of Edwin M. Culkowski created this Life Tributes page to make it easy to share your memories.