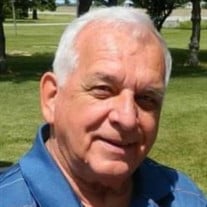 Edwin “Eddie O”, “Ed” P. Orzechowski, 84, of Toledo, passed away Friday, August 28, 2020, at his home with family by his side. He was born January 4, 1936, in Toledo, Ohio to Leo and Helen Orzechowski. Ed attended Macomber High School and was selected to participate in a Co-op program with Owens-Illinois. He held various positions in the Engineering Department during his 40+ year tenure. Ed’s career allowed him to travel to South America, Puerto Rico, Poland and throughout the United States. He also served his country honorably in the U.S. Army, where he was stationed in Greenland. He was a member of the Onized Club, where he was honored with the Distinguished Service Award in 1985. He also served as Tech Center President and the Golden Emblem Club President. Ed volunteered at the Jamie Farr Golf tournament, where he served as Captain of Hole #1 for over 15 years. He was an avid sports fan and enjoyed watching the Cleveland Browns and Indians, the Ohio State Buckeyes and NASCAR. Ed also enjoyed golfing, gardening, and traveling. Surviving are his sons, Ken (Laurie) Orzechowski and Jeff (Katy) Orzechowski; grandchildren, Rachel (Bill) Crowe, Missy (Ben) Swartz, Nick (fiancé Bridget Kennedy) Orzechowski, Tara Orzechowski and Megan Orzechowski and great-grandchildren, Denver Crowe, Charlie Crowe and Owen Swartz. He was preceded in death by his wife of 58 years, Nancy Orzechowski. Family and friends are invited to visit on Sunday from 1-7 p.m., at the Ansberg-West Funeral Home, 3000 Sylvania Avenue, (between Secor and Douglas Roads), where the rosary will be recited at 6 p.m. Due to COVID 19 regulations social distancing and facial coverings will be required. Prayers will begin on Monday at 9:30 a.m., from the funeral home, followed by the funeral mass at 10 a.m., at Christ the King Catholic Church, 4100 Harvest Lane. Interment will follow at Toledo Memorial Park, where Lambertville VFW Post 9656 will conduct military honors. Contributions in his memory may be made to the Hospice of NW Ohio, 30000 East River Road, Perrysburg, OH 43551. The family would like to extend a special thanks to Ed’s life-long neighbor, Barbie, for all the love and support she gave over the years.

The family of Edwin "Eddie O", "Ed" P. Orzechowski created this Life Tributes page to make it easy to share your memories.