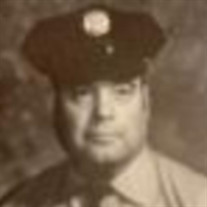 Edwin J. Hill, age 92, passed away on Sunday, January 24, 2021 due to COVID-19 complications. Born to William and Marguerrie Hill on December 3, 1928, in Toledo, Ohio, he was known by many as “Wimp,” nicknamed after the Wimpy character from the Popeye cartoon (due to his love of hamburgers in his youth). Wimp was a 1946 graduate of Libbey High School, where he played baseball and football. He attended the University of Toledo for one year, then worked at Di-Salle Plating for four years. In 1950, Ed married Helen Dorothy Bowers on August 26, at Augsburg Lutheran Church. He joined the United States Air Force in 1951, serving honorably until 1955 as a radio technician. In 1958, Ed joined the Toledo Fire Department, serving 28 years at Stations 15 and 25, until his retirement in 1986. After retirement, Ed worked part-time at Bedford Hills Golf Course. His love of sports led him to be a coach for various youth baseball and football teams in West Toledo. Ed and Helen were members of the Start Sideliners Booster group. Ed and Helen were long time season ticket holders of Ohio State football, where they attended many bowl and national championship games. Ed was a 32nd Degree Mason, earning his 50 year pin from the Grand Lodge of Ohio, and was a member of the Zenobia Shrine Ed was preceded in death by his wife of 63 years, Helen in 2013; and his brothers, Charles and Jerry. He is survived by sons, Jeff (Cindy), of Luckey, Ohio and Doug (Mary) of Clayton, Ohio, four grandchildren, Leah Hollyday, Mike (Adrienne), Kristin and Shannon Hill, and four great-grandchildren. Ed is also survived by his brother, Don (Kathy), of Old Fort, North Carolina, and sister-in-law, Jean Hill of Venice, Florida. Private services will be held for the family. Contributions may be made in Ed’s memory to Toledo Firefighter’s Museum, 918 West Sylvania Avenue, Toledo, OH 43612. The family would like to thank the staff at Alexis Gardens for giving Dad a safe, comfortable and caring home for the last eight years. The family like to also thank Senior Helpers and Kay from Legacy. Ansberg-West Funeral Home, (419) 472-7633, is assisting the family with arrangements.

The family of Edwin J. Hill created this Life Tributes page to make it easy to share your memories.