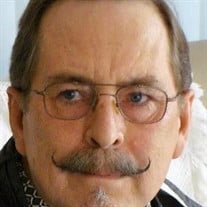 Edwin G. Quaintance, Sr. “Eddie Q.” 72, of Ottawa Lake, MI, passed away November 28, 2019 at Hospice of Northwest OH, Toledo. He was born on December 20, 1946, in Toledo, OH, to George O. and Helen (Mason) Quaintance. Edwin was an Army Veteran during the Vietnam War, serving from 1968-1969. He married Cheryl McQuestion in 1974. They celebrated 45 years together. Edwin was a proud member of Cement Masons Local 886, having over 54 years of service. He went through their apprenticeship program and soon became a mechanic at the trade. After his retirement, his many interests included but were not limited to antique cars, specifically Model A’s. He was a member of the Flying Quail Chapter (Penn, OH Model A Ford Club), Western Lake Erie Region (MARC), and Floral City Model A Restorers Club. Ed loved his Model A’s (1929 & 1930). He was happiest when working on them and touring with our many Model A friends. He belonged to the American Legion Post #0479, in Swanton, OH He is survived by his loving wife, Cheryl; daughter, Judy (Rob) Foltz; and son, Edwin G. (Melanie) Quaintance, Jr.; grandchildren, Nichole (Maggie), Foltz, Joshua (Connie) and Aaron Quaintance. Surviving brothers and sisters left to cherish their special memories of him are; Cheri (Mike) McFeeters, Lyndell (Ted) Szymanski, Charlene (Dave) Wood, George Quaintance, and Ron (Cindy) Quaintance, brother-in-law, Ed McCance, and special friend, Earl Lloyd. . He was preceded in death by his parents, Helen and George Quaintance; his brother, James and sister, Victoria ”Vickie” McCance. Family and friends may visit on Tuesday, December 3rd, from 2-8 p.m., at the Ansberg-West Funeral Home, 3000 Sylvania Avenue, (between Secor and Douglas Roads), Toledo, OH, 43613. Graveside services will be private and held at a later date. Memorial contributions may be made to Hospice of Northwest Ohio, 30000 East River Road, Perrysburg, OH 43551.

The family of Edwin G. Quaintance Sr. created this Life Tributes page to make it easy to share your memories.